The Return of James Cameron 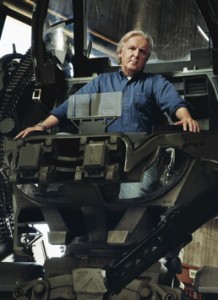 In anticipation of the upcoming movie, Avatar, Dana Goodyear of The New Yorker has written an in depth article about James Cameron, his life and his movies.

If you don’t know who James Cameron is, you A) have some ‘splainin’ to do, and B) have some immediate homework due on Netflix.

For those who are already up to speed on one of the most successful, talented, visionary (and uncompromising) individuals to ever work in film, you’ll really enjoy this article filled with behind the scenes tidbits, personal anecdotes and intriguing quotes.

She wanted to get married, but Cameron, she says, was not interested in a conventional domestic life: “He used to say to me, ‘Anybody can be a father or a husband. There are only five people in the world who can do what I do, and I’m going for that.’ ” She got pregnant, and moved out when their daughter, Josephine—Cameron’s first child—was nine months old.

For a great read, head over to the The New Yorker.

A quick shout-out to my friend, and talented scribe, David Strom for directing me to this article.