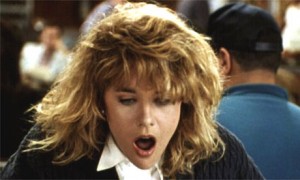 There’s a real joy that comes with learning an inside trick of the trade. In film school, one of the first such screenwriting secrets I remember learning was that funny things are made ten times funnier by showing reactions to them — reaction shots1.

Show me the funny

Think about your favorite comedy movie and what made you laugh the hardest. Was it a funny event — or someone’s reaction to that event?

Let’s take the famous diner scene from When Harry Met Sally. Is Sally’s (Meg Ryan’s) fake orgasm funny on its own? Maybe a little, but it’s more funny watching Harry (Billy Crystal) squirm uncomfortably. And it’s the funniest when the patron in the diner reacts with the line, “I’ll have what she’s having.”

Remember Superbad when Fogell gets his new ID and McLovin is born? The name McLovin itself is sorta funny, but it’s the characters’ reactions when they learn about the name that really make it hilarious.

McLovin? What kind of a stupid name is that, Fogell? What, are you trying to be an Irish R and B singer?

Reaction shots are even more important when there’s no dialogue and there’s just a sight gag.

Do you recall that hilarious scene in There’s Something About Mary, where Healy (Matt Dillon) is spying on Mary (Cameron Diaz) with binoculars? The audience laughter doesn’t come when he accidentally sees her saggy and wrinkly old roommate’s boobs — it comes when we see Healy cringe in horror.

So remember to include reaction shots in your script. It may make the difference between kinda funny and laugh out loud hysterical.