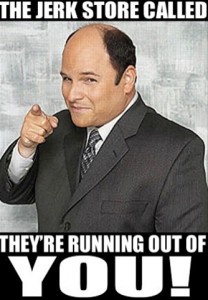 This is part one of a series on “Edgy Screenwriting” (AKA “Ways to bugger up your script”). The first article in this series asks the timeless question:

Is your protagonist a real jerk?

I want to know — is your protagonist an irredeemable jackass who we can’t stand at the beginning of your script?

If the answer is “yes” — you may be scriptwrecked

New writers, especially, enjoy creating protagonists who are unlikeable. They consider it to be edgy screenwriting. After all — you don’t see that many movies with completely unlikeable protagonists, so that’s a totally new take, right?

Now don’t get me wrong, your protagonist doesn’t have to be a good person, but…

It’s important that we like, enjoy or respect your protagonist

… especially at the beginning of your script. Here are a few reasons why:

Is your protagonist thoroughly unlikeable? Tomorrow we’ll look at ways to fix that… as well as some well known protagonists who appear at first to be irredeemable jerks (Billy Bob Thornton, I’m lookin’ at you), and why they work.