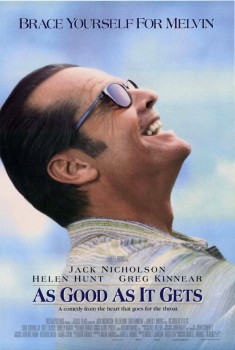 This is the follow-up to yesterday’s article on the dangers of the “Jerk Protagonist” (an irredeemable jackass who we can’t stand at the beginning of your script) and why I recommend avoiding this type of protagonist.

Today we’ll look at ways to turn that jackass into a protagonist we like, despite his obvious jerkitude. It’s part two (okay, technically part 1B) of a series on “Edgy Screenwriting” (AKA “Ways to bugger up your script”).

Most screenwriters who are intent on creating a jerk protagonist, will cite roles like Jack Nicholson’s character in As Good As It Gets, or Billy Bob Thornton’s Bad Santa. But there are specific reasons why these jerks work. And even though they play “unlikeable” characters, the audience still likes them — and that’s an important distinction. The protagonist must be written in a way that endears them to the audience in some way.

Blake Snyder’s brilliant screenwriting book, Save The Cat!, takes its name from a commonly occurring early scene in a movie where the protagonist does something (like saving a cat) to make him likable to the audience. For a jerk protagonist, it’s an easy way to show that he does in fact have some good in him… buried deep down beneath the gristle. It doesn’t have to be something obvious, but there should be something evident that makes us believe the jerk protagonist can change their ways.

Typically with jerk protagonists, however, the opposite of Save The Cat! occurs — Kill The Cat! For example, the opening scene of As Good As It Gets has Melvin Udall (Jack Nicholson) tossing a dog down a garbage chute.  So why then do we start to like Melvin?

2. Make Us Feel Sympathy For Them

The scene right after that shows Melvin going through his bizarre obsessive compulsive routine of repeatedly locking his door, turning on and off his lights and washing his hands (with brand new bars of soap each time) in scalding hot water.

Ahhh we get it. This poor guy has mental illness. Most of us can’t relate to his disorder, but we can certainly feel sympathy for him. The more offensive a protagonist, the quicker we need to understand the underlying problems behind the sour disposition. In Bad Santa, we quickly realize that Billy Bob Thornton’s character is a depressed drunk.

3. Make Us Feel Empathy For Them

Elle Woods (Reese Witherspoon) in Legally Blonde isn’t a classic jerk, but she walks the fine line of being unlikable with her perfectionism, perkiness, and odd manner of dress and speech.

But when Elle gets dumped by her boyfriend, we can all relate to that feeling, and we immediately have empathy for her. We’re now on her side, rooting for her.

4. Make Us Respect Them

In The Last Seduction, Bridget Gregory (Linda Fiorentino) is a coldhearted, ruthless, manipulative protagonist. But she does have a couple of redeeming characteristics — she’s sexy, and more importantly, she’s smart.

Bridget is always a couple moves ahead of everyone in the movie, and we respect that. Even though we can’t necessarily agree with her actions, we admire her brilliance and cunning. So the character works. Similarly, we can admire characters who are brave/crazy/clever enough to say the things we’d all love to say, but can’t come up with quickly enough, or would be considered rude in polite society.

5. Make Us Enjoy Watching Them Fail

Sometimes, we get a thrill out of seeing a miserable protagonist get their comeuppance for inappropriate actions or words uttered. Larry David’s “character” on the HBO series, Curb Your Enthusiasm has us jumping back and forth between respecting his biting wit, and simply enjoying his epic failures.

And last, but not least…

6. Make Them More Likable Than The Other Characters

We see this technique quite often in mafia movies and shows. The mafia is a corrupt and violent organization. So how do you get your audience to like your mob protagonist? Make him more upstanding than the characters he surrounds himself with. Give him some honorable family values.

The Godfather saga does a good job utilizing this approach with Michael Corleone (Al Pacino). Another great example is Ray Liotta’s character in GoodFellas.

It’s tricky business writing a jerk protagonist. If you undertake the challenge, be sure to make your protagonist enjoyable to watch in some way by using one, or more, of the techniques above.