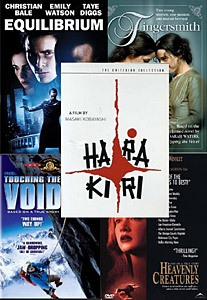 I racked my brain for something to give all of you as a belated Festivus gift. Gems? Greeting cards? Flying monkeys?

And finally it occurred to me — movies! So, I’m going to tell you about…

Obviously the term “best movie” is subjective. And since these were mostly mainstream movies, it’s quite possible you’ve seen some of them, but it still amazes me how many people I encounter who haven’t.

These movies span different genres, so hopefully there’s a little something for everyone.

In no particular order:

Before Peter Jackson gained international fame for a little trilogy about some Hobbits, he created this dark — yet whimsical, dramatic — yet fantastical, true story of two girls with an intense and unhealthy connection to each other.

This black and white, tragic samurai tale, released almost 50 years ago was decades ahead of its time in terms of non-linear story-telling, cinematography and screenwriting. In my opinion, if this movie was found in a box somewhere and released today, it would be nominated for an Academy Award for Best Feature Film. It’s that good.

Every once in a while, a movie will come out that the critics just don’t get. That was Equilibrium. Before Christian Bale squeezed into black rubber as the Dark Knight, he donned black priestly vestments for this dystopian thriller. Call it a guilty pleasure if it makes you feel better, but if you’re a fan of entertaining sci-fi action films, you’ll be happy you watched this movie.

One of the most thrilling and amazing true stories of survival. This movie one-ups many other documentaries in so much as it re-creates the fateful events with breathtaking cinematography. Simply a brilliant film and testament to the indomitable human spirit.

This one really surprised me. It was one of those Netflix recommendations that had a ridiculously high average score, so I was compelled to check it out.  Best. Decision. Ever. What an amazing miniseries (it’s two 90 minute movies) courtesy of the BBC. Twists, turns, and an unconventional love story. Time very well spent.

Well it looks like I was able to give you some gems after all. 🙂 Wishing everyone all the best this holiday season!!!

I look forward to hearing your take on these movies… and to hearing about any overlooked movie treasures or guilty pleasures that are on your list.