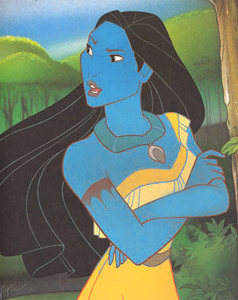 This article discusses the plot/structure of Avatar. However, since most of the joy of Avatar comes from the jaw-dropping visuals, it’s unlikely reading this article prior to seeing the movie will have any spoiling effect. Consider yourself halfheartedly warned.

Joseph Campbell popularized the concept of the hero’s journey or “monomyth” — which argues that numerous myths from disparate times and regions share fundamental structures and stages.

While current scholars may question the validity and usefulness of that claim, one thing’s for sure: Hollywood churns out a lot of movies that are structurally identical.

A number of recent articles in the blogosphere have compared the structure of Avatar to Disney’s 1995 movie, Pocahontas. A quick look at the image below will tell you that the similarities are striking.

There are similar images for other movies (this guy has a bunch of them), such as Harry Potter vs. Star Wars, but in my opinion the Avatar/Pocahontas parallels take the cake.

Most critics have hailed Avatar as a stunning achievement in special effects. Most of those same critics have also complained about the predictability of the story.

Is this criticism justified?

Yes and no. The story structure is very similar to any number of other movies, from Lawrence of Arabia to The Last Samurai to Dances with Wolves… that’s not a crime. It’s the old Hollywood mantra: “Give me the same only different.”

And that’s exactly what James Cameron did. He set Pocahontas on an alien world (where the aliens were blue and ginormous), crafted the concept of the “dreamwalkers,” added some flying dragons, floating mountain ranges and some bioluminescent flora, sprinkled in a Tree of Life, and many more original touches.

James Cameron is a creative genius and an encyclopedia of film knowledge. Of course he knew about all of these movie precedents while writing Avatar. His motivation for making this movie was to showcase visuals that would blow people to the back of the theatre.

You have to imagine that you’re James Cameron. You’re about to create the most expensive movie ever (again). Your movie relies on your ability to produce realistic 9 foot tall blue aliens in an impossible junglescape with technology that doesn’t currently exist or has never been proven.

Do you really want to take a chance with an experimental story? Probably not so much.1

By wrapping the stunning effects around a storyline that’s been proven to pack a punch, he knew that he could focus on creating the amazing world of Pandora and its inhabitants.

Of course that’s just my opinion, but it makes sense to me. What’s your take?