The Unconventional Brilliance of “Rocky” 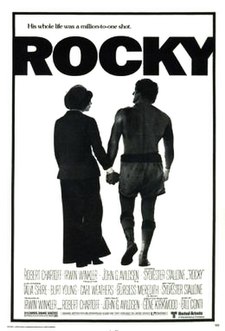 The Stuff of Legend

In this age of stock plots and by-the-numbers stories, I thought it would be nice to look back at Rocky [Amazon | IMDB] — a little spec script that broke the rules in 1976, became a box office sensation and won the Oscar for Best Picture.

The story behind the script itself is the stuff of Hollywood legend. An unknown screenwriter (and virtually unknown actor), Sylvester Stallone, writes a spec script so amazing that he is able to insist on starring in the movie’s title role.

The script itself, in addition to being nominated for Best Screenplay honors in 1977, is later hailed by the Writers Guild of America, West, as one of the 101 greatest screenplays of all time.

If you’re young enough that you’ve never seen, or heard of (cringe), Rocky, then I suggest you stop reading now and simply go rent or buy the movie. While its sequels eventually became formulaic and over-the-top, the original Rocky is a masterpiece of low-budget filmmaking, that tugs at your heart-strings and gives you a unique character you can’t resist rooting for.

What’s really amazing is that the movie does not follow conventional wisdom about screenplay structure. Most movies these days adhere to the rule that the Catalyst or Call to Adventure1 must happen within the first 10 to 15 minutes.

Incredibly, in Rocky, the Catalyst/Call to Adventure doesn’t arrive until the 53 minute mark! That’s when Rocky gets notified that Apollo Creed’s promoter is looking to talk with him.

How is it possible that the catalyst doesn’t arrive until the 53 minute mark? What happens for that extra 40 minutes or so to keep the audience engaged? 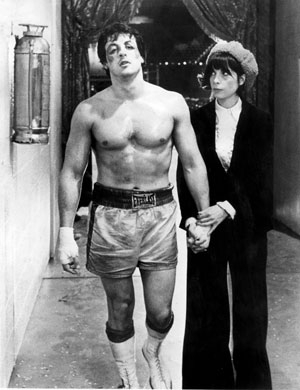 Why We Don’t Mind a Long Set Up

Rocky’s dreams of being a heavyweight champion are like my dreams of dating a supermodel who’s made of dark chocolate — it’s something too fantastical to even consider. What Rocky really dreams of is being respected. He also wants Adrian — the shy but cute pet store worker — to like him.

The first half of the movie spends its time on five things:

The All Is Lost Moment

In almost all movies the hero reaches a point of extreme crisis where they believe that all is lost. Usually that happens late in the second act. The hero then summons his/her courage and decides to push forward into the third act.

In Rocky, the “All is Lost” moment comes at the beginning of the third act. After one of the best training montages of all time (which carries us into the third act), at minute 93, Rocky goes to the arena where the fight is going to take place. The poster they’ve created for Rocky has the wrong color shorts. The boxing promoter tells Rocky that it doesn’t really matter. He knows Rocky’s going to give them a great show.

And that’s when it hits Rocky — at minute 96 — he can’t beat Apollo Creed. It then leads into the poignant scene with Adrian where he summarizes his real dream:

“All I want to do is go the distance. If that bell rings and I’m still standing, I’m gonna know for the first time in my life you see, that I’m not just another bum from the neighborhood.”

It’s worth noting that the early third act “All Is Lost”/”Dark Night of the Soul”3 sequence is not super uncommon. I’ll provide some more examples of such movies in a future post.

There are many other wonderful and unique touches in this film:

The bottom line though is that it’s okay to break the rules (of structure or anything else for that matter) as long as you know the reasons behind the rules in the first place, and can keep the reader/audience engaged in your story.