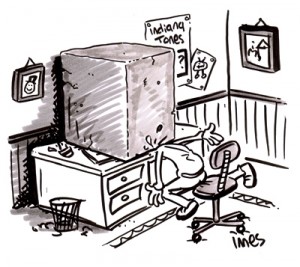 My lousy way of getting it done is better than your great way of not doing it.
– Terry Rossio

I was recently mired in the dreaded outlining process for my latest script. I tend to be quite zealous when it comes to figuring out the structure of my screenplay in advance.  That comes from seeing first-hand what happens when writers don’t.

Here’s the diabolical formula I swear by:

I have no scientific proofs for that formula other than my experience and observations. You can see, though, there are diminishing returns. So if you spend a year outlining, you may be missing the point (or have a reeeally tough nut to crack).

As great as outlining is, there comes a time when you just have to hunker down and write. If you wait until you have every single detail, of every single scene, in place before you write, you may be waiting too long.

You may be encountering “paralysis by analysis.” It can be crippling. I know I’ve suffered from it many times. And usually the best way to get over it, is to start writing.

By starting to write something, anything, you’re no longer dealing with a daunting blank page. What’s more is that your brain now has something tangible to sink its teeth into.

An athlete can do all the visualization in the world ahead of time, but on game day, their brain will be working ten times harder and filling in pieces that couldn’t be conceived of beforehand.

When doing it wrong is doing it right

When you’re stuck on a scene, you need to give yourself permission to write it the wrong way.

This concept is one of the many great things Blake Snyder talks about in his new book: Save the Cat! Strikes Back. Just ask yourself, “What’s the wrong way to write this scene?” If you know in advance that you’re writing something sub par, it takes all of the pressure off.

But a funny thing happens — before you know it, you’ve spruced up a few sentences, given your character a missing voice, and wouldn’t ya know it — you’ve even figured out that sticking point in the scene. Presto! You’ve just overcome your writer’s block.

And even in the worst case scenario, the “lousy” way you’ve written the scene is far better than the greatest way of not writing it.