5 Pitfalls of Rushing Your First Draft 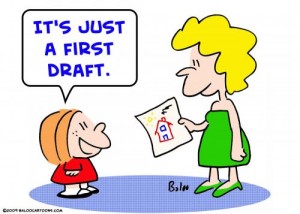 Many screenwriting books and gurus have this mantra: “If you start rewriting before you reach the end of your script, you will never finish it.”

They’ll say, “Try to reach the end of your first draft quickly, so you can get to the rewriting process, where it all comes together.”

5 Pitfalls of Rushing Your First Draft

While it’s true your script’s first draft should serve as a starting point for refinement, here are some compelling reasons not to rush it.

I know screenwriters who have hurriedly completed a first draft because they had an agent or industry contact that was eager to read their script.

I know it’s tempting, and I understand that industry guy sounded like he needed to see it NOW, but if you really want a shot in Hollywood, you won’t send him your rushed first draft. Unless you’re some sort of writing prodigy (and even then…) your first draft is going to need some polishing before it’s ready to go out.

If your industry contact is legit, he’ll be able to spot an unpolished spec script from a mile away. Here’s some Hollywood math:

When the focus of screenwriting becomes finishing that first draft, it’s easily to have an overinflated sense of accomplishment when that first draft is complete. Some aspiring screenwriters rip through their pages, put only a modicum of effort into the rewrite, then happily begin their next script.

Writing scripts is not just a numbers game. Recently, Julie Gray interviewed Jason Scoggins (a manager and partner at Protocol, a Beverly Hills-adjacent literary management and production company).1 In the interview Jason mentioned that he looks for writers with 2 or 3 strong scripts.

While having written 6 to 8 screenplays still earns you credibility (and means you’ve been honing your skills), when it comes time to sell your script, it’s really about quality over quantity. Take your time and make every script count!

As a writer, often your most brilliant work comes only after you’ve spent days or weeks fighting your way through a difficult story problem.

If you get into the habit of hopscotching away from these problem areas, you may never develop the skills necessary to defeat the story demons. Even when rewriting, you might feel the urge to avoid a trouble spot by vowing to “come back to it later.”

Professional-level writing takes patience, fortitude, belief in yourself, problem-solving abilities, creative-workarounds, mental gymnastics, buckets of heavily caffeinated coffee, and a myriad of other things you can only learn by forcing yourself to confront these known problems with your script.

I say the sooner the better because…

Many forces can hamper your rewriting efforts, or, worse yet, prevent you from starting them in the first place. One of the biggest culprits is something I call “script deficit.”

Script Deficit: The cumulative script issues that you know you’ll have to eventually fix.

Ever looked at a pile of papers and felt exhausted just thinking about the time it will take you to sort them out? That’s like script deficit. The more it’s allowed to grow, the more difficult it becomes to address the problems, and the more likely it is that you’ll never fix them.

Efficiency experts will tell you that you should only handle a piece of paper once. When you read your mail, deal with it right away. Don’t put it on the “I’ll do it later” pile, because then you’ll have to reacquaint yourself with the material and thus spend double the amount of time dealing with it.

Screenwriting is like that. I’m not saying that you need to perfect every little issue as you go along, but if you know there’s a fundamental problem with the scene you’re working on, you’ll be doing yourself a favor if you try to tackle that problem now.2

As script deficit grows, it makes the task of rewriting more daunting… and it becomes all too easy to add that first draft to the “I’ll do it later” pile.

Let’s face it, even if you rush through a first draft of your script, odds are you’ve still spent several weeks or months working on it. That’s a huge investment of time.

As humans we don’t like wasting our time. As such we conjure up all sorts of psychological tricks to get out of doing more work. If we spend four hours painting a large room, only to have the paint dry and discover it’s the wrong shade, we might be inclined to say, “You know, it’s really not that bad.”

The same thing happens with screenwriting. I can’t tell you how many times I’ve seen writers discover and acknowledge a fundamental change that needs to be made to their screenplay, only to reflect later, “You know, it’s really not that bad.”

Obviously these types of problems would ideally be sorted out in the pre-writing or outlining phase. But sometimes you just don’t know how something’s going to shake out until you try it.

The fact of the matter is that good screenwriting is really hard work. If you’ve got what it takes, come hell or high water you’ll finish that script. Writers write.

Whether you fix your scenes as you write them or after you’ve finished the first draft — you still have to fix those accursed scenes! And even the best first draft will still require multiple rewrites and passes after you’ve solicited feedback.

Don’t worry about crossing your t’s and dotting your i’s as you go along, while at the same time, don’t let some “finish that script” mantra stop you from rewriting a scene until you’re happy with it. Everyone’s writing style is different.

Feel free to rush to the finish line of your first draft if you fall into one of these categories:

How about you? Do you wait until you’ve completed your first draft before rewriting anything?