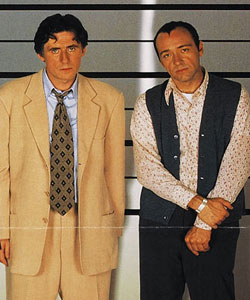 Okay, first — if you haven’t seen The Usual Suspects yet:

1) Punch yourself in the gut, because you deserve it.

2) Stop reading this article now — thar be spoilers… and this is one movie you do not want to spoil. [insert diabolical laughter here]

All right, now that that’s out of the way… I had the craziest conversation at my weekly screenwriters’ group meeting last night. One of our members was plotting a new thriller and was using The Usual Suspects as one of her story models. Possibly a risky move, but so far so good.

She was talking about how her main character is like Dean Keaton (played by Gabriel Byrne). That’s fine, but then she offhandedly referred to Dean Keaton as the protagonist of The Usual Suspects.

And then things really got weird.

Another member of the group agreed with her! And she has her Master’s Degree in Screenwriting from USC!

After my brain stopped exploding, I started going over the movie, and the criteria for a protagonist, in my head. I needed to remember why I believed it was all about Verbal Kint (Kevin Spacey).

Let’s look at the evidence for Verbal Kint as the protagonist of the movie:

– He’s the one telling us the story of what happened — so it’s his story, and we’re seeing it from his point of view (or the point of view that he wants us to see it from).

– He’s the central character. Verbal is the only character present in both timelines (the past chain of events starting with the line-up, and the current interrogation by Agent Kujan (Chazz Palminteri) — and connects the two together.

– He’s the one we’re rooting for. We learn at the beginning of the movie that Verbal (“a cripple”) is the only character from the group who survived, therefore we sympathize with him and are really rooting for him to make it out of this whole experience. If the other usual suspects had simply escaped, then a good case could be made for having a stronger rooting interest for Dean Keaton — the reformed baddie who’s found love.

Maybe brilliant writing is to blame for my group members’ belief that Dean Keaton is the protagonist. After all, there were enough key moments to make Agent Kujan believe that Dean Keaton was in fact the mastermind behind it all.

So Keyser Soze not only worked his magic on Agent Kujan, but also on my writing group buddies! However, in my opinion, Verbal Kint is the true protagonist.

In the end though, it only matters from an academic point of view who the protagonist is. The movie still kicks butt regardless.

But it’s always a worthwhile exercise to determine the protagonists (and antagonists) in movies so we can form a better understanding of what works, what doesn’t work and why. We can then apply that wisdom to our own scripts.

What’s your take? Who’s the protagonist of The Usual Suspects? Verbal Kint or Dean Keaton or both?