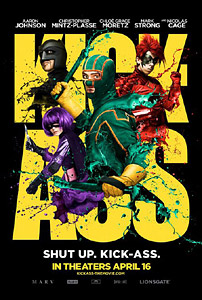 As with all my reviews, there will be absolutely NO spoilers. Sometimes even trailer moments will be excluded from my discussion. I hate it when surprises are ruined for me, so I’ll never ruin them for you! – Trevor

In the weeks leading up to the release of Kick-Ass, I had been very concerned about the way the movie had been marketed to mainstream audiences, and how that might affect its opening weekend.

With the final numbers now in, it appears my suspicions were correct. While Kick-Ass managed to squeeze past How To Train Your Dragon to win top spot in the weekend box office battle, the numbers were far from… well, you know.

Why didn’t it dominate the weekend box office?

Most of the TV commercials I saw (excluding those redband trailers only available on the net) portrayed the film as a campy kids movie. It almost felt like there was a disconnect between the people that made the film and the suits who marketed it.

The ads seemed to be saying: “Look everyone — it’s McLovin dressed up as a superhero. Oh the absurdity. You kids are going to love that.”

Or, “Check out the little girl who plays dressup and uses language that would make a sailor blush. That’s a clever gimmick dontcha think?”

The problem is that Kick-Ass is not that movie. It’s much much better.

It’s NOT A Kids Movie

The director (Matthew Vaughn) and the co-screenwriter (Jane Goldman) do a really nice job of anchoring the movie with realistic moments and scenes. Yes Virginia, there are tragic consequences to dressing up as a superhero and trying to fight crime.

This movie goes from being light-hearted and fun one moment, to being brutally violent and shocking the next. And that’s why the movie works so well. When the $#!t hits the fan, the humor isn’t forced.

Unlike other movies where the wisecracks completely extinguish the tension and the reality of the moment, this  movie gets it right. People react authentically to the various situations.

It’s something that all comedy screenwriters should take note of. In situations where the stakes are high, any humor in the scenes should flow organically from the actions and situations themselves, otherwise you risk taking the reader/audience out of the moment.

The Actors Play It Straight

There’s no Tommy Lee Jones, Two-Face style villain, cackling like a cartoon character in this film. The actors all play it straight; they don’t ham it up for the camera. That grounds the movie and makes it believable.

The always impressive Mark Strong does a brilliant job as the ruthless crime boss.

Nicholas Cage is fun to watch as a disturbed father with questionable parenting skills.

But the actor that steals the show is Chloe Moretz as Hit-Girl. After seeing her scene-stealing performance in 500 Days of Summer, I suspected that she would be the new “It”-Girl. This movie removes all doubt.

There are some really nice touches and surprises in this movie. The first act sorta plays out the way I thought it would, based on the TV ads. From the second act on, however, this movie finds its rhythm and really shines.

The fight sequences were very original, from filming style to weapons technology to choreography (though some of the action was definitely “inspired” by Equilibrium).

There were also some really clever lines, surprising plot developments and character arcs.

Plain and simple — if you enjoy watching great action or action-comedy movies, you’d be remiss if you didn’t see this one in the theater.

The movie’s not perfect. For example, the protagonist and his friends are no where near as interesting or enjoyable to watch as Hit-Girl and her father.

But when Kick-Ass is good, it’s really really good. Check it out.

Have you seen it yet? Post your thoughts below.