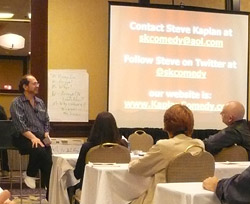 Part 1 can be found here.

Steve Kaplan’s Comedy Intensive is hailed as “The Industry’s #1 Course on Comedy.”

This past weekend I had the opportunity to check it out. So this week I’m imparting a few of its key teachings to all you aspiring comedy writers out there.

Today I’ll tell you about another one of The Six Hidden Tools of Comedy that I found to be particularly useful.

Note: All of the examples are my own, based on my understanding of the material. For a definitive discussion of the concepts, you’ll need to take Kaplan’s workshop.

A metaphor is when something literal is used in place of another to suggest a likeness between the two ideas. In film it can be used to great comedic effect.

Remember this scene from Planes, Trains and Automobiles?

The bedroom scene starts out looking like a classic moment where two lovers wake up together. While that’s obviously not what’s going on here, it suggests the bonding of these two friends, and we get an immediate understanding of the predicament they’re in. The result is pure hilarity.

There’s actually a double whammy of the Metaphorical Relationship in this scene. After the two characters leap out of bed, horrified, they go into a stilted discussion of football. It’s a metaphor for the stereotypical conversations that all red-blooded American males of course have.

Suppose you have to create a scene in a living room where Friend A needs to tell Friend B about something that’s troubling him. If you played it straight, you might end up with just a couple of talking heads.

But what if, when the two friends walk into the room, Friend A lies down on the couch and Friend B sits next to him in a chair like a psychiatrist? When Friend A starts unburdening himself, Friend B says things like, “And how did that make you feel?”

Or suppose you had to write an office scene where your nervous protagonist is about to go in to an important meeting. What if he gets a pep talk from his coworker in the style of a cornerman giving advice to a boxer, complete with a swig of bottled water and a spit into a garbage can?

“I want you to go in there and keep the witty banter up, dodge those budget questions and pepper them with your statistical reports. This is your meeting! Got it?!”

This tool is just that — a tool. It doesn’t have to appear in every scene, but it can certainly help you craft a comic moment if you’re stuck for an approach to use.

Are there opportunities to ramp up the funny in your scenes by using a Metaphorical Relationship?

Note: There’s never a good substitute for taking a class yourself, so if any of the ideas posted here intrigue you, I encourage you to sign up for the workshop the next time it’s offered (December 4-5, 2010 in L.A.).

For more information go to www.kaplancomedy.com.