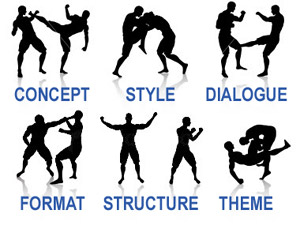 There’s a UFC event tonight, so I thought it would be appropriate if I posted the following article I recently wrote for the Scriptwriters Network June newsletter.

Mixed martial arts (MMA) is one of the world’s fastest growing sports. As the “mixed” part of the name implies, athletes must integrate and excel at a variety of combat disciplines — from kickboxing to wrestling to jiu-jitsu.

That’s similar to screenwriters, who must hone a variety of skills from structure to style to dialogue. Indeed, to be successful in Hollywood, screenwriters have to create scenes that rise above their competition.

As a passionate screenwriter and mixed martial arts practitioner, I can tell you there are a number of lessons that can be learned from MMA to elevate your screenwriting game and make your scenes leap off the page like a flying side-kick.

If you think of your scenes as “fights” between characters — where each character wants to win (i.e. achieve their goal for the scene), your scenes will be much more powerful.

When fighters don’t engage each other, they usually receive a chorus of boos from the crowd. The screenwriting equivalent is that your readers get bored, skim pages or stop reading your script.

A surefire remedy to keep them interested, is to up the conflict. That doesn’t mean throwing a fight into every scene, it means adding a realized (or threatened) element of verbal or physical “combat.”

What are you up to Friday evening?

I’m heading out with some friends.

Kinda boring, right? But if we add some simple conflict?

JEROME (17), testosterone in a t-shirt, and KATIE (17), sexy but studious, share a table. Katie takes a long sip of her double chocolate frappuccino.

I’m still waiting for an answer.

Quite often you’ll see a classic striker versus grappler match. The striker wants to keep the fight standing, while the grappler wants to take the fight to the ground.

Giving the characters in your scene, two different agendas, can make your scenes more engaging.

I’m glad you agreed to meet with me. I’m really looking forward to getting to know you better.

Excuse me? I’m here because you hired me to tutor you in Algebra.

There’s a UFC fighter named Lyoto Machida. Until recently he had not only won every single fight he had ever been in — he had won every single round! That’s quite an achievement. He did it by avoiding his opponents.

One way to add tension to your scenes is to have one of your characters try to avoid the “attack” (i.e. agenda) of another character. If one character is trying to set something up and the other character isn’t biting, it makes the scene more interesting.

Do you see how factoring lets you find those two numbers?

In MMA there’s always a lot of trash talking before the fight (and often during the fight). But when the cage door closes, actions speak louder than words.

Try going through your scenes to see if any of them would be stronger if one or all of the characters simply let his actions do the talking.

I’m just saying, if your clothes distract me from learning, maybe that’s your fault. Your lessons come with a money-back guarantee right?

Katie slams her coffee cup on the table, launching her chocolate frappuccino into the air like a geyser. The liquid splatters across Jerome’s face.

Hone your full set of screenwriting skills, have your characters fight to “win” each scene, and your script may be in fighting shape to win you a contract.

The Scriptwriters Network, founded in 1986, is a non-profit, volunteer-based organization created by writers for writers and industry professionals.  The Network serves its members by enhancing their awareness of the realities of the business, providing access and opportunity through alliances with industry professionals, and furthering the cause and quality of writing in the entertainment industry.