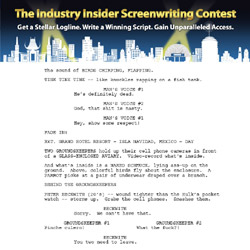 The Writers Store recently held an intriguing Screenwriting Contest. An industry screenwriting veteran — in this case, Simon Kinberg (screenwriter of Mr. and Mrs. Smith) — would provide a logline that contest entrants would then need to craft into the first 15 pages of a screenplay.

Here was the logline provided:

A spy who has spent life wining and dining young women suddenly gets a major surprise when his daughter knocks on the door.

It sounded like a lot of fun, and implied an action comedy genre, so I decided to enter it. So did over 1,000 other people. Which meant the odds of making it to the top 10 was less than 1%. Difficult, but not insurmountable (my kind of challenge).

According to the Writers Store, there were so many “stellar scripts” that they “came close to increasing the final count to 20.” I believe them.

If anyone at the Writers Store has any insight into this final process, or even the other 11-20 names that were in contention, I’d love to hear from you.

At any rate the top 10 finalists beat me, so well done!

If any of the finalists (Araby Patch, Sarah Newman, Mary Krell-Oishi, Leo Sardarian, Jacob Snyder, David Steiner, Kenneth Lemm, Yuri Shallan, Bob Giordano, and Alex Berger) feels like sending me their submission to read, I’d love to check them out (I promise I won’t blog about it).

UPDATE #1 (August 2, 2011): Nine of the finalists’ scripts are now available for download.

UPDATE #2 (August 2, 2011): For those entering the current round of the Industry Insider Screenwriting contest, here’s a great tip from Dana Hahn, Industry Insider Contest Coordinator, who was kind enough to provide it to me:

“The main thing that we’re looking for in our contest is the quality of the writing, and a unique take on the logline.”
– Dana Hahn, Industry Insider Contest Coordinator

Thanks Dana! And good luck everyone!

For those interested, here’s my submission entitled BLOWN. I think it’s really good, yet it didn’t qualify. So, if your 15 pages didn’t qualify either, don’t feel bad about it. It’s not necessarily a reflection of your writing. You win some; you lose some. That’s just the nature of the game.