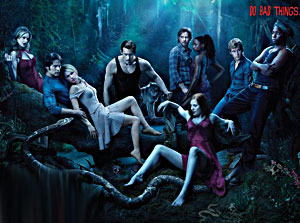 Blake Snyder, the late author of the superb screenwriting book, Save the Cat!, coined the term: “Double Mumbo Jumbo.”

I propose to you that, for some reason, audiences will only accept one piece of magic per movie. It’s The Law. You cannot see aliens from outer space land in a UFO and then be bitten by a Vampire and now be both aliens and undead.

That, my friends, is Double Mumbo Jumbo.

Of course, as Blake goes on to say, this rule is broken all the time in Hollywood. Sometimes it works fairly well — Monsters vs. Aliens. Most times it doesn’t — Howard the Duck (A trash-talking alien duck that has sex with Marty McFly’s mom — what could go wrong?).

Obviously True Blood is an adaptation, where characters and situations from the books need to be incorporated to stay true to the source material. I’ve never read the books, but I have to wonder — has the cable show gone off the rails recently?

More shapeshifters than you can shake a stick at

True Blood used to be my favorite show. In season one, it was an intense exploration of the vampire genre with very adult themes and a wicked sense of humor. Now it tends be more of a bizarre mishmash, where every other character turns into a different animal or creature.

I don’t know how loyally Alan Ball has followed the Sookie Stackhouse books, but it seems to me there’s way too much mumbo jumbo going on in Bon Temps these days.

Why did Buffy work so well?

Buffy the Vampire Slayer had a very similar universe, and worked exceptionally well. So what’s the difference?

I think Buffy works, where True Blood doesn’t, on a few levels:

– Buffy had a lighter feel to it. The focus was usually on the snappy banter and most scenes were played for laughs. Whereas True Blood definitely has a darker tone. That more adult vibe makes it harder to get away with the sillier elements of the story.

– Every season of Buffy had a “Big Bad” — a main foe that the characters had to face. True Blood seems to be lacking that this year. Perhaps the witch lady is gearing up to fill those shoes.

– The core group of “Scoobies” on Buffy were usually pitted against one particular opponent. It was rare that two dissimilar foes would be brought into the picture per episode. You definitely can’t say the same for True Blood. It feels like there are a dozen different storylines per episode.

Anyone else think True Blood has suffered from some growing pains these last couple of seasons?