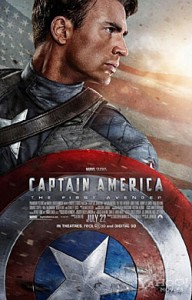 "I'm coming to save you, faceless multitude!"

Note: There’s a very minor Captain America SPOILER directly below, but it’s worth braving because this tip is a really good one.

Okay now let’s get on to the tip. And this one’s a doozy. I’m tempted to call it “Save the Cat… Again!”

In an action movie’s third act, make sure your hero is saving someone specific.

Captain America was actually quite an enjoyable movie. The first half, especially, was very strong, and even emotionally moving at times. But the last act left me wanting for some reason. Sure, ol’ Cap was doing his action hero thing, and the stakes were high (the aforementioned saving of the world), but there was something missing.

And that’s when it hit me. There was no one specific to save.

“The death of one man is a tragedy. The death of millions is a statistic.”
– Joseph Stalin

Think of all your favorite action movies. There’s always someone specific that needs to be rescued. It’s either the hero him/herself, or at least one character you know, or both.

If it’s only the hero him/herself that needs saving, then that means the hero needs to escape from a situation that they didn’t willfully put themselves into in the third act.

Think how much weaker those movies would have been if they were only about defeating the bad guy(s). Keep that in mind when you’re writing the ending of your next action movie.

Can you think of any brilliant action movies that break my rule?