Is Netflix the best resource for screenwriters? 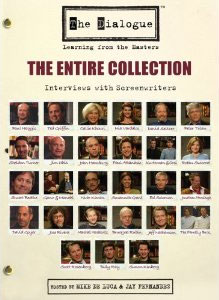 Netflix. What is it good for?

Netflix has received some (probably warranted) bad press recently, due to their significant price hike. But if you can afford to shell out the cash for at least one more month, you’ll be able to take advantage of one of the best resources for screenwriters anywhere.

I’m not talking about their movie selection (though that’s good too). I’m talking about one specific set of DVDs known as The Dialogue.

The Dialogue: Learning from the Masters

Hosted by Mike De Luca (Producer of dozens of diverse movies including: Boogie Nights, American History X, Austin Powers, The Social Network), the series consists of in depth interviews with some of Hollywood’s elite screenwriters.

Here are just a few of the 27 screenwriters interviewed:

The DVDs are only few years old, and will give you the best bang for your Netflix buck.

I can’t recommend these DVDs enough. Each 80 minute interview is jam-packed with incredible tidbits of knowledge you can only learn straight from the pros. These are MUST SEE DVDs guys.

Note: The full set of DVDs are also for sale on Amazon.com.

Update: Apparently Amazon isn’t selling these interviews in DVD form, but they are streaming and making them available for download (for a small fee). Here’s a link to one of my favorite interviews, Nicholas Kazan (Matilda, Fallen).