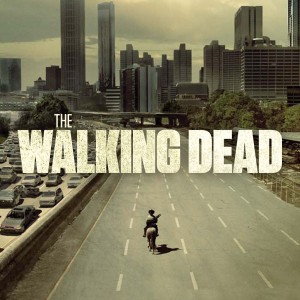 My first gripe with The Walking Dead is that it’s only on once a week. Damn, that show is addictive.

My second gripe is more of an actual gripe. You know how those zombies are highly contagious ‘n junk, right? For instance, in the last episode they were worried about shooting the zombie in the well and contaminating the water supply.

Well then why in the hell is everyone so cavalier about killing the zombies and letting their juices splatter all over their faces? I’m a bit of a germaphobe, but if I were in that world, I’d be the guy in the HazMat suit. Barring that, I’d at least have a gimp mask, or something!

In the season opener. The sexy blond lady stabs a walker with a screwdriver, while screaming at it, with blood spattering all over her open mouth. In the latest episode, the black dude smashes the poor water logged zombie without even thinking about the resulting splash.

There are many more such instances from both seasons. How hard would it be to have the characters at least pull a scarf up over their mouths before Al Caponing the walkers? What’s with all the unprotected slaughter?

Obey the rules of your own universe

When you’re crafting a story, it’s so important to obey the rules of your own universe.

Say you have enchanted stone warriors in your story who can crash through solid cement walls. Well then you can’t have those same warriors succumbing to a punch by Brendan Fraser in the next scene! It takes the believability down a notch.

So here are some things I’m genuinely confused with about The Walking Dead. If there are any super fans out there, perhaps you can enlighten me.

1. What are the walkers attracted to?

In the first season, the zombies could smell the humans. There was even one scene where the good guys had to smear themselves with zombie guts to disguise themselves.

Yet in this season, whole herds of zombies can pass by a bunch of sweaty humans hiding underneath cars. Hell, they even passed by the black dude who had a gaping wound in his arm. Couldn’t they smell the blood? Isn’t it like the scent of freshly cooked popcorn to them? 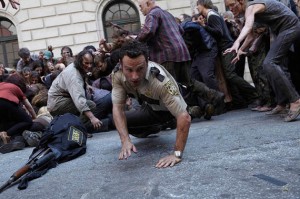 Quick, hide under a car!
In Season 2 it’s like a zombie forcefield.

2. Are the walkers alive or dead?

So I kinda liked the scientific explanation of the walkers at the end of season one. There’s some small primitive part of the brain that is still alive or some such. That avoids the supernatural angle.

But then that raises all kinds of questions. If a small part of the brain is alive, then doesn’t that mean the zombies are alive?

They eat food. We saw the contents of one of their stomachs. So does that mean their digestive system is still working? Maybe these zombies just need a better PR guy.

In that big traffic jam they find themselves in this season, there are a bunch of dead bodies just lying around. What did they die of, starvation? Wouldn’t the zombies have feasted on them while they were still alive? And if they did feast on them, wouldn’t that have turned them into zombies?

And if the zombies feast on bodies until there’s almost nothing left, then how come most of the walkers are so intact?

I love The Walking Dead. These are smallish issues, but they do reduce my enjoyment of the show.

Anyone else have a problem with these things, or do I just need to access more of my zombie brain while watching?