Do you write active scene descriptions? 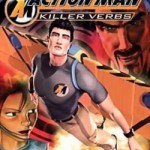 There’s a reason that scene description is also known as “action lines.” It’s important that your descriptions contain the feeling of movement, even when none actually exists.

Here’s an example of a weak way to describe objects at a location (i.e. bad writing):

Stacks of dusty boxes are everywhere.  There’s a deer head on the wall.

Blech. How can we make that better? Let’s make the objects come alive with a couple of simple changes.

Stacks of dusty boxes pack the room.  A deer head stares from the wall.

Not fantastic writing, but you get the idea. Giving your objects an action (even though they’re not moving) brings your scene description to life.

There was no character in this scene. But if there was, one of the active ways to introduce objects in a scene is to have your character(s) interact with them.

Steve pushes through stacks of dusty boxes. A deer head stares at him from the wall.

And don’t forget to use the active forms of your verbs whenever possible.