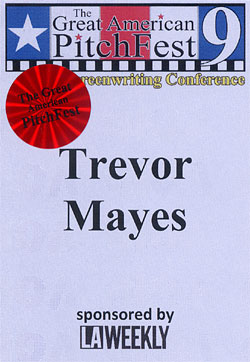 Thanks to Ben Cahan, and his Talentville contest, I won a free pass to this past weekend’s Great American PitchFest (GAPF)! I was thrilled because the event is always so well put together and truly one of the best ways to get face-time with people who can help you get your movie made.

If you’ve never been to GAPF before, it’s basically speed dating — but with Producers, Directors, Managers and Agents. You pay one flat fee that allows you to have 5 minute meetings with as many people as you can see during the course of the day.

Some of the bigger companies have longer lines, so you have to weigh the benefit of waiting a half an hour to see one key person, versus maximizing your time, and meeting with multiple people. So depending on your predilections you’ll end up pitching between 10 and 20 times during the day.

This year the PitchFest offered its Saturday screenwriting classes and panel discussions for free! That means, even if you didn’t buy a ticket for the PitchFest, you could still come down and learn some new things — all for no charge. If you missed it, keep that in mind for next year, if they do it again.

Here are some of my random experiences from this year’s Great American PitchFest.

The Great American PitchFest is run by two special people — Signe Olynyk and Bob Schultz. During their “Making the Most of…” orientation on Saturday night, I noticed something quite interesting about them. They genuinely cared about making your experience at PitchFest the best it could be.

One of my writer friends introduced me to a guy named Adam Levenberg, who was selling his screenwriting book — The Starter Screenplay — at a separate kiosk. If you’ve been following my blog, you’ll know that I devour screenwriting books like chocolate. And not all chocolate is created equal.

After talking with Adam (a current Hollywood Executive) for a few minutes, I knew I had to buy his book. I’m only a few chapters in, but I already know it’s one of the best books out there. I’ll post some nuggets from it in the coming days.

The lunch break at PitchFest is crazy long — like an hour and a half or something. So what’s a writer to do after he’s stuffed his face? Write!

The Script-A-Thon was sponsoring the PitchFest’s annual scene writing challenge. You had to hand-write a scene up to 5 pages long, while using the following line of dialogue: “If I’d known you were going to be this easy, I wouldn’t have worn these shoes.” You also had to use this object in a creative way: Pineapple.

I’m proud to say that my scene won!

The best part is that I got to learn all about the Script-A-Thon 30 day screenwriting marathon and competition. If you haven’t signed up for it yet, I highly recommend you do so. The chances of winning are much better than in many other contests, and the caliber of judges is impressive.

Here are the free sessions I attended. They were all excellent.

I’ll be posting individual write-ups on these sessions in the coming days.

I got to meet some terrific screenwriters this year. You know who you are!

My pitches went very well… for the most part. As I had different scripts to pitch — depending on the person I was pitching to — I felt a little bit schizophrenic at times. But it was a great challenge.

The one thing I learned, is that it really pays to make a connection with the person across the table from you, before launching into your pitch. Every time I sat down and forced myself to ignore the pressure of the time constraint, the pitch went extremely well. Hopefully I’ll have some good news to report on that front soon.

How was your PitchFest experience?