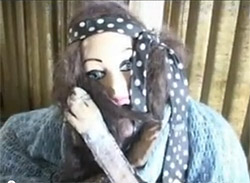 Here are the videos that have been haunting my dreams this past week.

Have you seen this parody of The Bachelor yet? It’s one of the funniest things I’ve seen in a while. Thanks to Yahoo throwing some money behind it, the production value is exceptional for a web series.

It also stars some pretty big names including Ben Stiller, Malin Ackerman, Kristen Bell, and another famous actress who makes a surprising appearance in episode 2.

The other episodes can be found here. New episodes air every Monday and Thursday.

So apparently Justin Bieber held a contest where girls were supposed to post a video of themselves singing a “Girlfriend” version of his song: Boyfriend. The result was one of the creepiest, funniest videos that will make you hope Justin Bieber has an army of security guards.

It now has 5 million plus views and shows no sign of slowing down:

If you think the above video was creepy, you should stay the hell away from the one below. This video, featuring the character of Shaye Saint John, is equal parts brilliant, deranged and hilarious. Whether you love it or hate it, one thing’s for sure — you will never forget it.

Seriously, words can’t prepare you for this video. You’re just going to have to watch it.

If you’ve still managed to keep your sanity, you might wish to check out this great Geekosystem article on the madman/genius behind the Shaye Saint John character and many more disturbingly funny videos like Hand Thing. Just make sure all your doors are locked first.

What videos have been haunting your dreams this week?