Table Read for My Demon Girlfriend 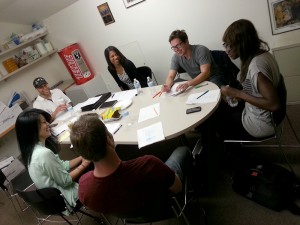 As this blog evolves, and as screenwriters evolve, I’d like to add directing, short films, video production and marketing to the conversation on Scriptwrecked. These days screenwriters need to have a utility belt of skills that they bring to table, in order to get noticed and stay noticed. I’ll continue to post my experiences so that others can benefit from the things I learn and the mistakes I make along the way.

A few weeks ago the cast, and some of the crew, of my short film script, My Demon Girlfriend, got together for a table read. As a screenwriter, I’ve heard actors reading my scripts before, but never for a shoot that I was going to direct. So it was a new experience for me.

Here’s how I did it…

What I’d do next time…

I’d do the initial read through and the second read through, with my notes, again. However, I’d also spend more time using the table read as rehearsal time. 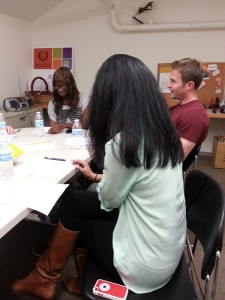 There were a few little things I noticed during the read, that I thought I’d just mention afterwards to the actors in a separate email, or that I thought we’d just fix during the rehearsals while we were blocking out the scenes. For the most part, that strategy worked out, but it certainly would have gone smoother if we had rehearsed the scenes a few more times.

As an example, there was one line in particular, where Jenni (the talented actress playing Krillith) put an emphasis on a word that imparted a slightly different meaning than the one I had intended. It wasn’t that big a deal, so I thought I’d just leave it for discussion later.

Unfortunately, on the day of shooting, the actress had solidified her delivery of the line, so when I proposed a change, it was more challenging for her to pull it off naturally. In addition to that, I (mistakenly — shhhh) changed up the line from the one that was in the script, so it took us a few more takes on the day to get it right.

What Else I Learned

There was a wonderful moment during the table read, where Trace (the talented actor playing Chad) tripped over a line, then embellished it into a really humorous moment. It worked so well, that I included it in the final version of the script.

It was a good reminder to always be open to new and better dialogue possibilities. There were also some lines that just kinda fell flat when they were read. The table read gave me a chance to go back and fix them and other issues related to the pacing of the scenes.

If you’re filming a comedy, I recommend having as many of your production team members available during the table read as possible, so that you can hear the laughter from the lines that work and the deathly silence from the ones that don’t.

To see more photos, and for more information about My Demon Girlfriend, please visit our production team’s web site or our Facebook page. If you’re in the Los Angeles or Orange County area, and have some skills or hardware that you’d like to volunteer for a future production, please let me know.