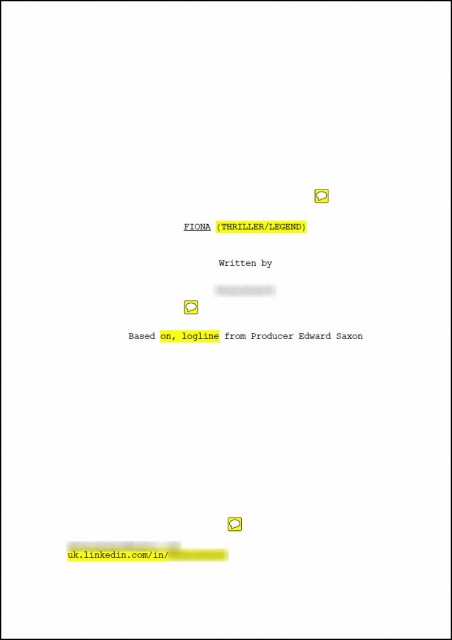 A few months back, a reader of my blog (Danny), posted a comment on one of my articles about the Industry Insider Screenwriting Contest. He was “disgruntled” and more than a little baffled as to why his 15 page script didn’t make the cut — especially when he felt he was just “an inch away from opportunity.”

Seeing a chance for fans of my blog to learn from his experience, I got in touch with Danny and promised to take a look at his submission, if he allowed me to post my critique publicly on my site. I’ve been busy for the last couple of months, but finally had some free time this week, so I dove in.

While I can’t speak to the exact reasons the contest judges chose not to select Danny’s entry as one of the finalists, I can certainly offer my opinion based on my years of experience as a script consultant.

Question: Typically, how many pages does it take for an experienced script reader to rule out your script as a prospective contest winner?

Why? Because most scripts are really poorly written — right from the get-go. If the writing is bad on page one, it rarely gets better by page 10. After all, if you’re going to make any single page in your script shine more than the others, it should be page one. That’s the critical page. That’s the page that solidifies the readers’ first impressions.

But first impressions begin with the title page itself. In Danny’s script, there were three things I highlighted on the title page alone. That’s a huge red flag.

Do you see the issues?

So we haven’t even gotten to the first page of the script and there are 3 issues. Not a good sign.

But what does the first page look like? I think the best way to illustrate this is to show you a different one first.

This is the first page of the script that ended up winning the contest for that cycle, written by J.R. Phillips. Like I did, you can download it here. Her script is entitled: THE BADLANDS: DEAD GIRLS DON’T CRY. (By the way, her title page was clean and flawless.) 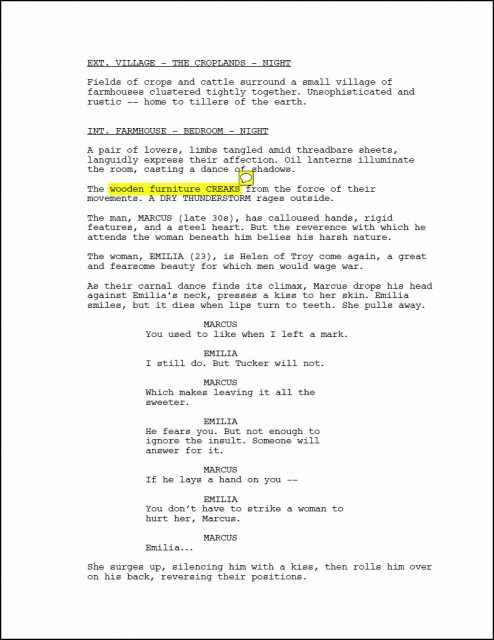 Impressive. Only one technical issue! ONE! And even then it’s nitpicking.

The “rule” is that if you’re going to capitalize sounds then you should capitalize the sound AND the thing that makes the sound (i.e. “The WOODEN FURNITURE CREAKS”). Again this is a minor peccadillo on an otherwise brilliantly executed first page. It certainly isn’t anything that distracts from the quality of the writing or the story itself. And this “rule” is violated all the time in professional scripts these days. 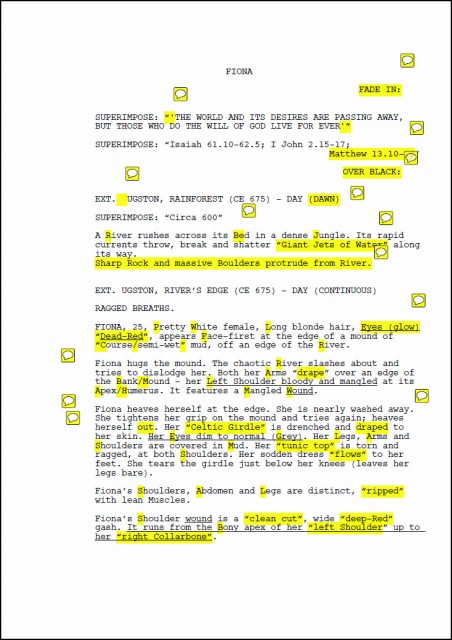 I annotated this script, like I do with my script notes service, and it’s riddled with problems. I’ve written fifteen different notes for dozens of issues — all on page one.

Let’s take a look from top to bottom:

It came as no surprise to me that things did not improve on pages 2 through 15.

What About the Story Itself?

Again, I can’t speak for the Industry Insider Screenwriting Contest judges, but here’s the thing… Even if the underlying story is fantastic, there’s no way I could present this as an example of finalist-quality writing. It is, after all, a writing contest. Having a good story is only one piece of the puzzle. Great writers can:

One out of three isn’t going to cut it, especially when there are thousands of entries to choose from.

The truth is, even beyond all of the technical mistakes, the writing isn’t very strong. I only mentioned a few things that stuck out. If I were editing this first page, there would have been many more notes.

Danny seems like a friendly, eager screenwriter, and I wish him all the best. In time, he may be able to better his writing to the point where he starts to place in contests, etc. But he’s not there yet.

The first thing I would recommend to him, and frankly any screenwriter out there, is to read and absorb a screenplay formatting book like David Trottier’s The Screenwriter’s Bible, or  Christopher Riley’s The Hollywood Standard.

Proper script formatting won’t make your story any better, but it will let your writing stand on its own merits. And that’s all you can hope for.

Any other issues with Danny’s script that bear mentioning? Who can tell me why his main character introduction doesn’t work?