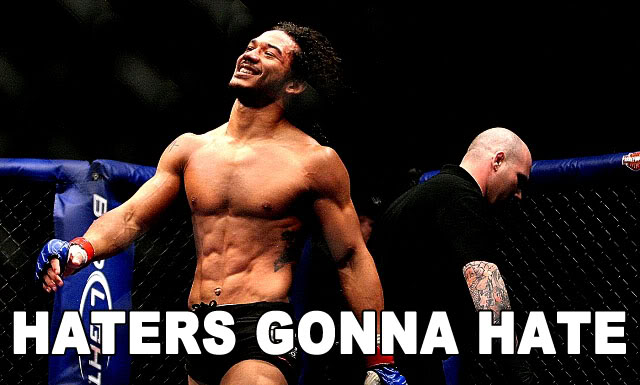 Anyone else out there a fan of MMA (mixed martial arts)? No? Doesn’t matter, this lesson applies to any professional endeavor — including screenwriting.

So there’s this fighter named Benson Henderson. He’s got about as much genuine swagger as any human has a right to. And for a good reason — he steamrolls over most of his opponents.

This, ladies and gentlemen, is genuine swagger!

After handily winning his last bout, he was almost in tears talking about how people have no idea how hard he trains for his fights.

Here’s a guy who you can tell by looking at him, and seeing him fight, has tremendous natural gifts. He’s one of the best fighters in the world, yet he still pushes himself to the breaking point during his training camps.

Gone are the days when some fighter, who merely dabbled in mixed martial arts, could rise to prominence off of luck or talent or connections alone. If you want to be successful in MMA, you have to embrace the grind.

It got me thinking. The same rule applies to screenwriters.

The successful screenwriters are the ones embracing the grind and putting in their hours of writing, networking, and keeping tabs on the industry. Every. Single. Day.

How on earth can you expect to compete with them (or other amateurs who are similarly inclined) if you’re only writing once in a blue moon?

If not, the screenwriting equivalent of Benson Henderson, or Ronda Rousey, or some up and coming amateur, is going to kick your ass. Because right now there are only a few coveted jobs or spec sales for screenwriters.

Bottom line is, if you you want to succeed — hell, if you just want make the fight competitive — you have to embrace the grind.