The Importance of Active Verbs 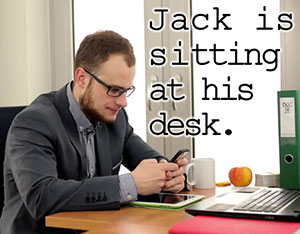 The truth is, there are passive and active forms of verbs. The active form (without the “ing”) is almost always the best one to use.

For example, I often see a variation of the following sentence:

Jack is sitting at his desk.

Jack sits at his desk.

Now we have something that not only uses the more active tense but is also shorter (which you should know by now is a good thing in screenwriting).

So things are better, but “sits” doesn’t tell us a whole lot about what Jack is really doing or feeling. It’s something of a wasted verb, because if he’s at his desk, he’s obviously sitting.

Get the idea? Much more descriptive and interesting.

I’ll often come across something like this sentence after a master scene heading.

Katy on the ship’s deck.

Now you’re not even trying. Sure, it tells us who we’re looking at and where she is (and it’s brief), but again, it doesn’t provide us with any action or context.

Katy grips the rail of the ship’s deck, eyes burning.

A seasick Katy slouches against a crate on the ship’s deck.

Katy scrutinizes her crew on the ship’s deck.

You get the idea. Don’t be lazy. Use a more descriptive verb, put us in the mindset of your character and make us feel something.

Note: In the first of the three sentences above, I actually use an “ing” form of the verb in the second half of the sentence. That’s perfectly acceptable.

Do you have any writing questions? Let me know!