Screenwriting Expo 2011 – Why and How to get a Manager 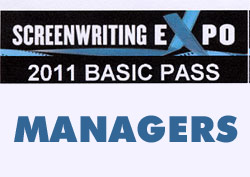 All this week I’ll be providing you with insights and stories from this past weekend’s Screenwriting Expo in Los Angeles.

In yesterday’s post, I discussed my first impressions of the conference. Today I’ll share some terrific insights from the several Managers’ panels I attended.

What is a Manager?

What is a Manager and how do they differ from Agents? Others may have something different to say about it, but here’s my simplified take…

A Manager wants to guide your screenwriting career, work with you to develop great scripts, and help you find an Agent.

An Agent wants to make sure you’re working on a script they can sell, so they can sell the shit out of that script.

Managers tend to have fewer clients than Agents, because they need to spend more time with each client.

Why do you need a Manager?

Managers have their fingers on the pulse of the marketplace. Maybe you’re planning to write a vampire epic as your next script. A Manager can tell you that the marketplace is saturated with scripts about those moody, fangy bastards and save you 3 to 6 months of your life. (There is some overlap with Agents in this regard.)

They will also work with you to make sure your script is as great as it can be before it goes out. This is important, because studios aren’t interested in development. They’re interested in booking slots for movies. So the more polished a script is before a studio gets their hands on it, the less time will be spent on the script in development, which means there’s a greater likelihood that the script will actually reach the production phase.

Managers also have connections with Agents. If you have a proven track record of producing quality scripts, and have a killer script ready to go, a Manager can refer you to an Agent who can take your career to the next level.

How do you get a Manager?

First, it’s probably easier to get a Manager than an Agent. But “easier” does NOT mean “easy.”

Managers, like all non-vampires, only have a finite amount of time. So they can’t be spending their time reading every single script that comes their way to determine if the writer is any good.

That’s why they rely on two primary sources for new clients:

This is the biggie. If someone they know and trust recommends that they take a look at a particular screenwriter, then that means that screenwriter has already been vetted to some extent.

Okay so how do you get someone to refer you to a Manager?

Answer: Be a great writer.

Often times you’ll hear people talk about networking. And networking is important, but really the best networking happens as an ongoing result of developing your writing skills (going to conferences, participating in writing groups, meeting people in the industry). As I’ve written before, Hollywood uses a self-authorizing password.

If you have talent, and put in the time, you’ll learn to walk the walk, speak the lingo and come across as a professional writer. On top of that you’ll have a few quality scripts that prove you’re a writer and not a dabbler.

Success is where preparation meets opportunity. When you’re ready, you’ll have all the knowledge and the contacts you need to get a Manager. It’s not a magic bullet, but it is what it is.

This is an interesting one. Many of the Managers said that they find new clients from screenwriting contests.

I said that the Managers find new clients. If you’re sending them a query email or letter, odds are it’s going to get deleted or trashed. One Manager said that he only took on one new client based on a query letter in the last fifteen years. And he was the generous one.

Managers are bombarded with dozens of emails every single day from people who have won contests. And not all contests are created equal. If you’ve just won the Podunk Screenwriting Contest, it doesn’t mean anything.

Here are a few contests that the Managers said they look at (it’s by no means all inclusive, but it is listed in approximate order of mention/importance):

Did anyone else attend the Managers’ panels? Do you already have a Manager? Let me know if there’s anything important I left out.