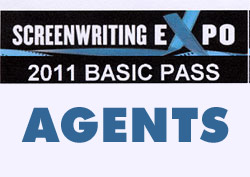 Today I’m excited to relay some excellent advice and industry insight from some Agents whose sessions I attended:

Just like my friend Michele Wallerstein, the first thing you notice about a successful Agent is that they’re all extremely high functioning and assertive. If you ever have an opportunity to meet with an Agent, make sure you’ve had a full night’s sleep, a double shot of Espresso, and are firing on all cylinders… or you simply won’t be able to keep up.

Wisdom (her real name), has a commanding presence that makes you sit up and pay attention.

Gladstone looks like Peter Parker, has an I.Q. that’s obviously north of 140, and is probably Kaiser Soze.

Hohman (the least intimidating of the bunch), made a joke in passing about his being a savant. (He probably wasn’t joking.)

After searching for some web links, I found Wisdom’s web site. I also found a great article/interview by Jim Cirile (who hosted one of the panel discussions) that features Gladstone. Be sure to read through these two sources for some of the same tips that were offered during their Screenwriting Expo sessions.

And now, without further ado, I present…

Note: The following insights are my interpretations of what the Agents said. Any errors or omissions are purely my own.

Did you attend any of the Agent sessions? What was the best advice you heard?

– First Impressions
– How do you get a Manager?