The Grouse Grind of Your Script 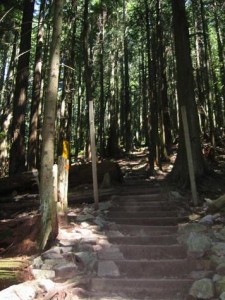 In Vancouver, British Columbia, the Grouse Grind is a trail that has become infamous among local hikers. Actually it’s not so much a trail as it is a seemingly neverending staircase forged by evil forest gnomes.

Hiking it for the first time can be a truly soul crushing experience — especially when you think you’re nearing the top and you see a sign that says, “1/2 Way Point.”

Writing a script for the first time can be just like that.

You toil and plod along for an interminable period, then you look back on what you’ve written and realize you’re still only somewhere in the middle. It’s enough to make you want to take a break. A long break. Maybe even try another trail. Or worse yet, give up and head back down the mountain.

A couple of years ago, I took a great screenwriting class from Pilar Alessandra. She told the class that we wouldn’t believe how many of her friends have half of the best script ever written. And that’s it.

It doesn’t matter how good the first half of your script is if it isn’t finished.

That lesson always stuck with me. Screenwriting isn’t easy. It takes dedication and steely resolve. But there’s good news. If you’ve properly outlined your script in advance (so you don’t get lost in your second act), writing the last half of the script is usually much easier than writing the first half.

In the second half of your script, you know your characters much better, have settled in to the style of your script, and can actually see the finish line, all of which propels you more quickly to the end.

There’s light at the end of the tunnel.

So if you’ve stalled somewhere in the middle of your screenplay, keep grinding your way up that hill. Before you know it, you’ll be there. And the amazing satisfaction you feel after writing, “FADE OUT” makes all the sweat and effort worthwhile.

Just remember to hit that Save button before you pass out.