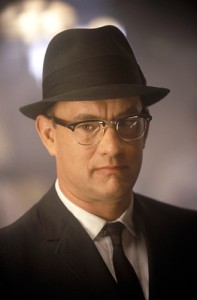 Today I went to the Alameda’s Writer’s Group‘s monthly open meeting in Los Angeles, where I took in a great speech that Bill Boyle was giving called: “Respecting The Antagonist.” In this first half of a two-part article, I thought I’d summarize and paraphrase some of the fundamentals of who the Antagonist is that were discussed today.

Who is the Antagonist?

Is the Antagonist the bad guy? Nope.  The villain? Nuh uh. In modern storytelling, the Antagonist is simply the primary force that opposes the Protagonist. This force is usually a person, but doesn’t have to be. The Antagonist can be multiple people, society, an institution, an animal, God, death, a challenge… etc., or even in rare instances, the Protagonist himself.

In The Perfect Storm, the Antagonist was Nature (i.e. the raging storm and sea).

Typically the Antagonist is the “bad guy” (by our own value judgments), but in practice the Antagonist can be good, bad or anywhere in between. He just needs to oppose the Protagonist.

In the movie Catch Me If You Can, the Protagonist played by Leonardo DiCaprio is a con man. He’s up against Tom Hanks — the compassionate FBI agent — who is the Antagonist. The Antagonist here is the “good guy.”

In Thelma and Louise, the respectable cop played by Harvey Keitel is the Antagonist to the Protagonist title characters. Again, in this case, the Antagonist is the “good guy.”

I put “good guy” and “bad guy” in quotes, because it’s all a matter of perspective:

“The essence of true character conflict is not derived from the protagonist being right and the antagonist being wrong, but from both characters being right carried to an inevitable conclusion. Villains and unsympathetic characters don’t consider themselves evil.  They, like everyone else, [are] doing the very best they can given their fears, needs, knowledge, skills, pain, and personal history. It is the hero that offers us the journey and the objective of the story, but it is the antagonist that creates the drama. A great antagonist makes us squirm not because of the opposition he represents but because there is a truth behind his position that makes us uncomfortable. It is the antagonist that forces both the hero as well as us to confront our shadow side.” – Bill Boyle

The best Antagonists always believe that they are in the right.

So then how do  you tell who the Protagonist is?

An Antagonist’s function is to provoke the inner and outer journey of the Protagonist.

Here’s another way to look at it:

Tomorrow I’ll go over what makes for a great Antagonist…