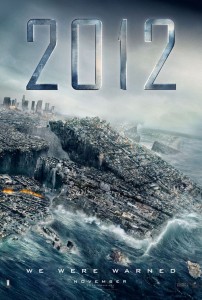 As with all my reviews, there will be absolutely NO spoilers. Sometimes even trailer moments will be excluded from my discussion. I hate it when surprises are ruined for me, so I’ll never ruin them for you!
– Trevor

This review is easy. Do you enjoy seeing big budget action movies that center around an Apocalypse? The ones where you don’t want to be anywhere near a recognizable landmark? Movies like Armageddon, Independence Day, and Knowing? Yes? Then you’ll certainly enjoy 2012.

I know I did. And I’m not apologizing for it.

Sure there are impossible action sequences — ones that would leave even James Bond crying for his mommy. Sure the physics behind the global catastrophe will likely have physicists scratching their heads.

That’s all okay. Because I knew what I was getting into before I went to see this movie — a special effects extravaganza of epic proportions, held together by a satisfactory narrative.

And boy did it ever deliver on that end! I bet the CGI animators are still exhausted! There were some truly amazing, jaw-dropping cataclysms rendered on screen.

The movie also did a decent job of strategically locating a few characters that you cared about, in harms way. It made the mass destruction events that transpired much more engaging.

There were also some nice character touches. The antagonists were more well-rounded than is typically seen in this type of movie. There was even a surprise appearance by one of my favorite actors in a comedic role — at least it was a pleasant surprise to me.

If the bus jumping over the gap in the highway in Speed was enough to make you say, “That movie sucked!” — then this isn’t the movie for you.

If, on the other hand, you enjoy seeing awesome imagery and having a few laughs (both at the intended humor and the ridiculous improbability of surviving some of the events), then this is definitely worth heading out and seeing on the big screen.

Have you seen 2012? Post your take on it in the comments section below.