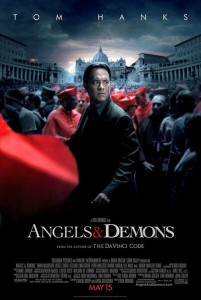 I rented Angels & Demons the other night. I thought they did a nice job with the considerable challenges of adapting Dan Brown’s novel into a movie. But this post isn’t about that — it’s about the DVD extras.

On the Angels & Demons DVD there are two great finds:

For those of you unfamiliar with the book or movie, it’s a fast paced mystery starring Tom Hanks and Ewan McGregor that takes place in Rome and Vatican City. Obviously the crew wasn’t allowed to film in such places as the Sistine Chapel or St. Peter’s Square — but you are completely unaware of that fact while watching the movie.

The behind the scenes footage shows you the various stages of digital effects — from filming in an empty parking lot with ginormous green screens, to the finished product where you absolutely believe you’re seeing Tom Hanks exit St. Peter’s Basilica into St. Peter’s Square with a crowd of thousands. The future is now ladies and gentleman.

2. That Ron Howard knows his stuff

There’s a reason Ron Howard continues to direct one hit movie after another — he really gets it. As screenwriters we also need to be aware of the reasons why people go to movies and the mechanisms by which we can provide them with a rewarding entertainment experience.

I took the liberty of transcribing these great off-the-cuff remarks from one of the interviews with Ron Howard. He reminds us of some of the fundamental elements of powerful cinematic storytelling:

“Characters, I think, become rich and interesting to us when we’re seeing them being tested. You start to understand them as individuals. And then you see the rug pulled out from under them. You see them challenged in unique ways. That’s when we begin to wonder, ‘What would we do in that situation? Are we like this character? Are we not like them? Do we know any character like them, ever?’ And it stimulates our imagination.

Movies allow you to empathize and relate to characters and situations that you as an individual could never otherwise experience. You go on these journeys; you lose yourself in them. And you begin to understand the world in ways you wouldn’t have otherwise.”

This article features the following item: