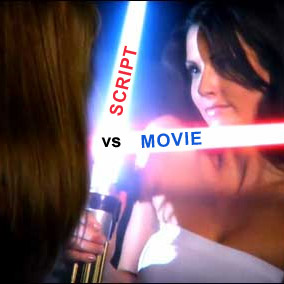 This is the first in what may become a series of articles where I’ll take a look at an early version of a script and compare it to the resulting movie.

In the blue corner, the SCRIPT: Written by James V. Simpson (Feb. 5/07 version)

In the red corner, the MOVIE: Directed by Nimród Antal (Released 2009)

A newbie guard for an armored truck company is coerced by his veteran coworkers to steal a truck containing $42 million. But a wrinkle in their supposedly foolproof plan divides the group, leading to a potentially deadly resolution. 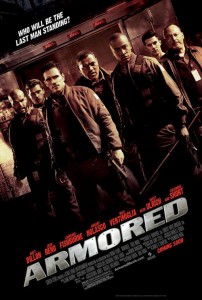 The added element of the wife doesn’t add anything to the script. In fact it’s a character that simply disappears after the first act. Without the wife, it makes Ty’s (the protagonist’s) job of raising his younger brother on his own, much more difficult. Which sets up the reasons he must participate in the heist much more believable.

Having just the one young cop also works well. You have more invested in the character as you get to know him earlier. You also empathize with him because he’s working on his own and still trying to do the right thing.

There were so many unbelievable moments in the movie that, quite honestly, ruined it for me. I was eager to read the script after seeing the movie, because all of these things smacked of director or producer tinkering. Boy was I right.

And the Winner is…

While the script was definitely more believable, the movie had a stronger set up, more fleshed out characters and a much stronger ending. Ultimately though, the lack of believability of the movie means that the audience (and box office) is the real loser.

As well, there were too many scenes where the protagonist was simply left to wonder, “What should I do?” and wasn’t coming up with any suitable answers. You’re not going to see that in a comparable (and superior) movie in terms of format — Panic Room, with Jodie Foster.

Many of the elements of the script were changed for the better. Unfortunately, many things were also changed for the worse. That may help to explain the abysmal box office gross of the movie ($14,195,000 vs. $20,000,000 budget) according to Box Office Mojo.

Was this article helpful/interesting? Let me know if you’d like to see more Script vs. Movie battles.