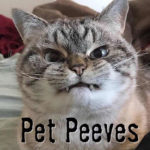 There are at least seven ways to improve the following short script excerpt. Can you find them all?

Patricia is sitting at her computer. She looks at her monitor, then angrily KNOCKS on it.

Come on you damn poltergiests! I know you’re in there!

Wow, that was hard to write that junk! When you’re ready, scroll down for the answers.

The structure was correct (starting with the general and moving towards the specific), but it’s even better to keep scene headers as brief as possible, while still maintaining clarity. Simply write it as follows:

Depending on how you’ve framed the scene sequence, or other locations in your script, you could also use:

You would only include the “UPSTAIRS” if Patricia had another bedroom elsewhere in the house. Even then you would probably be better off using: “INT. PATRICIA’S UPSTAIRS BEDROOM – DAY”

I covered the basics of this rule in a previous article. So is the following correct?

Patricia sits at her computer.

Well yes, and no. There’s more to the story…

Usually you can eliminate this verb. If an individual is at a computer or diner or table or desk or chair, etc. — it’s understood that they are sitting. Give us a more qualitative verb or even combine some of the ideas.

That leads us to…

There are certain verbs that are just lazy (looks, walks, gets… please see my previous article). They give us no insight into Patricia’s state of mind and lack a descriptive punch. See if you can come up with something better.

Taking the above points into consideration we would be left with something like this for the first part of the description:

Patricia gawks at her computer monitor.

5. Try to avoid using adverbs — just come up with a better verb

Sometimes there’s no getting around using adverbs, but usually there’s a stronger verb just waiting to be utilized. “Angrily KNOCKS” — yuck! Just use a verb like: “pounds.”

Before we tidy up the description, we need to take a look at the next point…

6. Don’t capitalize sounds if they’re made by actors on screen

In a spec script, it’s debatable whether or not you even need to capitalize sounds at all. But if you do, you wouldn’t capitalize a sound that the actor produces on-screen through their live interaction with the environment.

So an improvement to the description would be:

Patricia gawks at her computer monitor. Pounds on the screen.

Note: I’ve taken out the “then” from the original line, but it was a stylistic choice. Sometimes using the word “then” can help delineate two actions that occur at different times.

Did you catch it? The word “poltergeist” was misspelled. Don’t forget to spell check your work!

Patricia gawks at her computer monitor. Pounds on the screen.

Come on you damn poltergeists! I know you’re in there!

How did you do? Any other obvious things I missed?

It’s amazing how many problems can exist in such a small section of script. Make sure you don’t make the same mistakes.