Donut Bagel and Other Title Lessons 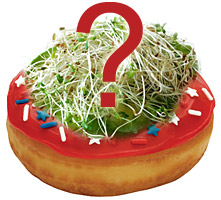 So I was driving along the road the other night and noticed a brightly lit fluorescent awning for a new food establishment called: Donut Bagel.

As I zipped passed it, many conflicting thoughts sprung to mind:

– It has the word “donut” in the name, so it must be a bakery selling sweets.

– No wait a minute. It also has the word “bagel” in it, so it must be a health food eatery.

– Just a tick — it has both those words in the name, so it must be some unholy, deep fried, sprouted abomination.

I don’t know how successful ye olde Donut Bagel shoppe will be, but if it doesn’t survive in a world not yet ready for such brazen food items, I’ll be willing to bet it’s because its name (and therefore its message) was confusing. It doesn’t immediately answer the question that all restaurants, and movie titles, need to answer:

When we’re driving by a billboard at 60 MPH, we don’t have time to read the fine print, or to assess all of the imagery. Often times, we only have time to process the title.

If the title doesn’t evoke an “Oh I get it — that sounds cool!” response in us, odds are the movie isn’t going to do so well.

State of Play — what? Body of Lies — huh? Despite both of those Russell Crowe movies being quite good, they did very poorly at the box office1.

There’s lots of great advice in Stephanie Palmer’s book: Good In A Room. One of the best sections talks about how movie titles must be S.M.A.R.T.

”
S: short (the fewer words in the title the better)

M: memorable (something that stands out or has an element of drama)

A: accurate (correctly representing your proposition)

T: tonally appropriate (in accordance with the genre of the project)
“

Make sure you run your movie titles through that criteria when deciding on one.

If we look at Donut Bagle under that filter it misses out big on the last one — being tonally appropriate. I’m a health nut, so I have no idea whether I’d be happy or horrified if I walked in there.

Say you heard about a movie called Slaughterhouse. You’d probably think it was a horror movie. But what if it were actually the story of an 1820’s school teacher, Edith Slaughter, who taught orphans how to read and write? The producers may not be appealing to the right demographic with that title.

This is a tough climate — for scripts and for restaurants. Your title is at least something you can control.