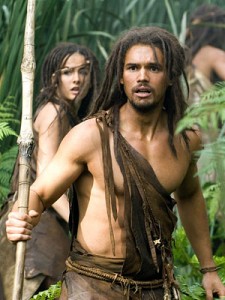 As writers we spend our lives in a cave, hammering out stories. But it’s a misconception to think that we’re alone in there. Oh no, we’ve got our little darlings to keep us company.

You know, our darlings… our cherished characters or moments that got us writing the script in the first place. Sure, other characters and moments come along, but often we like those initial darlings the best because we’ve been with them the longest.

That’s why it’s so hard to kill them when they’re dragging our script down. And kill them we must.

The Tribe of your Script

Most writers know that you have to embrace humanity’s caveman instincts to craft great stories: greed, love, lust, revenge, pride, glory, jealousy,  survival… You have to get primal! The same lesson applies to dealing with your script darlings.

If movies have taught me anything about Anthropology, it’s that life was tough for our cavemen ancestors. If any members of the tribe couldn’t keep up, they were left for the Orcs to eat… or something like that.

The point is — you have to treat your screenplay the same way. In the tribe of your script, it’s all about assembling the ideas most likely to help you succeed in battle (i.e. Hollywood).

How do you know it’s time to get out the cave club?

It may be time to kill (or change) your darlings, if:

1. … every time you try to figure out what’s wrong with your script, you’re led back to that one story darling (e.g. a “cool” character that goes nowhere; a “sweet” action sequence that feels forced or out of place; a “powerful” scene or image that no longer fits with the story or theme or structure; etc.).

2. … you pitch your idea, structure or draft to other writers, etc. and consistently get critical feedback pinpointing that darling of yours.

A Quote From Blake

In July 2009, Debra Eckerling interviewed Blake Snyder (author of the must-read screenwriting book: Save the Cat!) for Write On Online.  I thought I’d give Blake the last word with his quote from that article:

The first mistake writers make is in the concept. We are inspired to write for all kinds of reasons, and not all of them should wind up in the final product. I call this the “smell of the rain on the road at dawn.” You’re driving down the street and see some guy wearing a t-shirt and you go, “That’s a movie.” And maybe it’s not.

The second thing is in terms of story execution, which is corollary of the first idea: you are the small “g” god of this universe. You can change it any way you want to change it. And your prime directive is to tell a good story. A lot of writers—myself included—fall in love with stuff: that scene, that sweater that guy’s wearing; sometimes you don’t realize you can swap it all out for something else and make it work.

I think you’re only real goal is to tell a story about transformation and to make that transformation huge. A guy starts out one way he ends up another way. It’s important to keep those things in mind as you create. Just because you thought of it doesn’t mean that’s the way it has to stay.

Often, just being aware of this bias for your original ideas is the key breakthrough your script needs. Do you have a story darling that needs to be whacked?