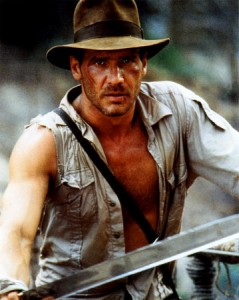 It was the 90’s. Spec script sales were booming, and through an amazing convergence of events, a friend of a friend of mine (we’ll call him “Screenwriter X”) managed to get his script to Harrison Ford‘s people.

At the time, Harrison Ford was one of the biggest names in Hollywood, having starred in blockbusters such as the Star Wars saga, Indiana Jones trilogy, The Fugitive, Clear and Present Danger… He was a guy who could get movies greenlit.

As luck would have it, he read, and LOVED, Screenwriter X’s script!

The meeting was set. Screenwriter X was picked up in a limousine and brought to a fancy restaurant in L.A. It was like a dream — he got to the restaurant and Harrison Ford himself, opened the door for him.

They sat down, had a pleasant conversation. Mr. Ford, and his Manager beside him, proceeded tell Screenwriter X how incredible his script was and how much they enjoyed it.

This was the big moment!

Then Mr. Ford said: “However, we’ve thought about it and feel that my fans just aren’t ready to see me in this type of role.”

Harrison Ford continued with the fateful words: “But we love your writing… What else do you have?”

And that was it. Screenwriter X’s once in a lifetime chance to rocket to the top of the Hollywood food chain was dashed. He didn’t have any other scripts.

What’s worse, he didn’t have any other ideas. Nada. Zilch. He was woefully unprepared for the meeting. To this day he laments about what could have been.

3) If you get a meeting with an A-List star who loves your script, it’s probably a good idea to have an agent.

I was reminded of this story after attending Michele Wallerstein’s great talk yesterday at the CBS Studio Center. She has a wonderful formula.

When you’re pitching, you should have a total of 10 ideas ready:

– 3 polished scripts — all in the same genre

– 7 great ideas for other movies

Are you going to be ready when your big moment comes along?