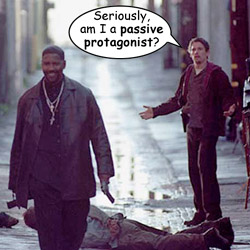 A reader asks about Passive Protagonists:

I was reading on your site and was wondering what your thoughts were on “passive protagonists” who get drug into hairy situations like Officer Hoyt in Training Day. I am writing a movie where the guy gets involved in a situation and has no choice but to continue on kind of like Officer Hoyt. Is it possible to make a good movie with a reactive protagonist like this?, because that is exactly what I am trying to do.

Let’s break the question down into two parts:

First things first. What is a passive protagonist?

A passive protagonist is a main character that displays some or all of these traits:

You get the idea.

Are any of those traits, ones that you would respect, like or enjoy in a friend, business partner, lover, person you want to hang around with, etc.? Of course not. That’s why readers/audiences don’t embrace that type of character either.

It’s extremely common for beginning writers to craft screenplays with passive protagonists. One of the reasons why many screenwriters (including myself) have fallen victim to this trap, is that on first glance, many beloved movie characters seem to be passive.

It turns out, Luke is actually a very active and willful character, determining his own fate.

If we look at Training Day‘s Officer Hoyt (Ethan Hawke) using that same lens, he’s actually not a passive protagonist.

See I mean? Officer Hoyt is the one making the major decisions that determine his fate in the movie, even though at first glance it may appear that he’s getting dragged along for the ride.

Part 2: Can a protagonist be reactive?

Sure they can. In fact, most protagonists are reactive — for at least ONE key moment in the story. Whether you refer to it as the Call to Action, Call to Adventure, Catalyst, Inciting Incident, Opportunty… typically this is an event that happens to the protagonist.

It’s one of only three places1 where the protagonist can appear to be somewhat reactive or passive. But overall, your protagonist must be a “willful character” for readers/audiences to embrace her.

It’s okay for your protagonist to be forced into a hairy situation at the outset. Just make sure your protagonist quickly begins to take action, or makes the critical decisions from that point on.

That’s really the secret to great screenwriting — coming up with situations where your protagonist is forced to make difficult decisions.

Can anyone out there think of a recent movie that featured a true passive protagonist — successful or otherwise? Please post below.