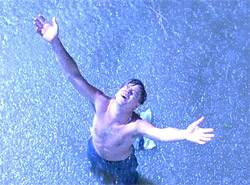 Some movies are unstoppable

I’m not talking about runaway box office successes. I’m talking about those movies that can hold your rapt attention in every scene until the closing credits — whether you want them to or not.

Sometimes I’ll flip channels late at night, just to “quickly” see what talk show guests are on. Inevitably, I’ll stumble across one of my favorite movies.

That’s when the fight begins; the fight to stop watching.

I’ll keep telling myself, “The TV goes off at the next commercial.” After all, I already know what happens. And I really need to get some sleep. I’ll just watch one more sequence.

Then of course when the closing credits roll, I stagger to bed, bleary-eyed, in the wee hours of the morning.

The movie was literally unstoppable.

Here are some questions you need to ask yourself about each and every one of your script’s scenes.

There’s no such thing as a throwaway scene in a great script or movie. Make every one count, and your script will be unstoppable.

What are some movies that you find are unstoppable?

For me it’s The Shawshank Redemption, Butch Cassidy and the Sundance Kid, The Usual Suspects, The Matrix, Aliens, Kill Bill: Vol. 1, The Incredibles, The good, the bad and the ugly, and for some damn reason — Kung Fu Panda. If I tune in at any point in any of those movies, I’m stuck watching until the end.

See if you can stop watching this scene from The good, the bad and the ugly halfway through?

Want me to read your script and let you know what I think? Please take a look at my script services.