Did No Ordinary Family pull a “Riker’s Beard”? 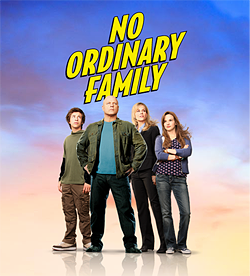 Is anyone else watching No Ordinary Family — the show about a family of superheroes? I think it may have pulled a Riker’s Beard (the opposite of “Jump the Shark”) in last night’s episode, and turned itself around.

Don’t get me wrong, the show has its inspired moments. But usually it’s so bad that I created a new drinking game. You do a shot when you see something completely unbelievable.1

Here’s how you would have played the game with last week’s episode:

Needless to say, if I play this game I’m usually sloshed by the end of the episode.

But last night’s episode was disappointing, in that it wasn’t, er… disappointing. It was actually pretty good. Maybe the disparate voices in the writers’ room have finally agreed on the tone of show? Maybe it has pulled a Riker’s Beard and is about to become awesome?

Only time will tell. But in the meantime, I’ll have my booze ready. (Maybe the trick is to drink before watching the show?)

Anyone else find last night’s episode uncharacteristically good? Anyone think I’m off base? What’s your take?