The Late Villain Reveal in Television 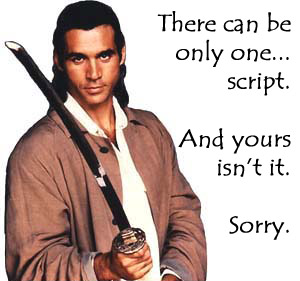 Many years ago, when I was young(er) and dumb(er), I decided to write a Highlander: The TV Series script on spec. In my story, someone was trying to kill Duncan MacLeod, and the episode was about finding out who it was.

Through a combination of tenacity and ignorance, I was actually able to get the show’s producer/writer, David Tynan, to read it.

Lucky for me, he was a really nice guy and gave me some great advice and encouragement. I’ll save the lessons I learned for another day. Today’s post is about one of his criticisms of my script. He said that I had introduced my villain too late.

You know how in every whodunnit type of show, you’re introduced to all the suspects early on, then the episode serves up a platter of misdirection, until the end when you realize it was the person you least expected?

Well I hate that crap. When you know the rule, and you see the meek school teacher with the cute stutter, you know you’ve found your killer.

So I framed my episode this way:

I thought it was a clever play against the standard framework, but perhaps it was too unfamiliar. So unfamiliar in fact, that I’ve never seen it. Ever…

Until the last episode of Castle entitled “Close Encounters of the Murderous Kind.”

In that episode, which involved an unholy mix of UFOs and Lyle Lovett,  a doctor was referenced early on, but we never saw him.

Towards the end of the episode, I thought they were going to zero in on the cute female observatory assistant — but no! The doctor, who we’d never seen before, turns out to be the villain. It was a true surprise and I thought it worked really well.

Did anyone else see the episode? What did you think?

Have you ever seen this type of late villain reveal in any other show?