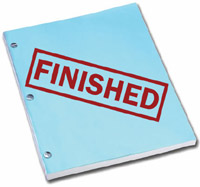 I’ve recently put the finishing touches on a sci-fi comedy script. It took a while, but it’s finally done. How did I know it was done? Here’s the criteria I use:

What did I leave off this list? How do YOU know when your screenplay is finished (other than someone handing you a check for it)?