Do you double or triple-space scene headings? 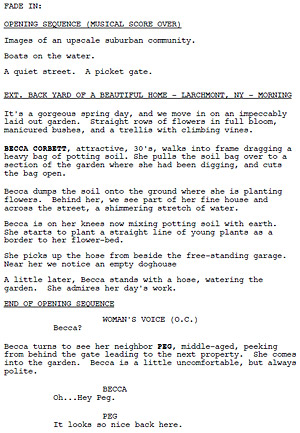 I recently found myself in a bit of a quandary. After countless hours cutting and tweaking, my finished script weighed in at 111 pages. I had really wanted to come in under 110 pages (as spec script lengths are trending shorter and shorter these days).

As a big fan of whitespace, I always triple-space my master scene headings (i.e. I leave two blank spaces above them). But what if I simply double-spaced them (i.e. leave just one blank space above)? How many pages could I save?

After switching from triple-spacing to double-spacing I was at 109 pages. Woohoo! But not so fast. The new spacing made me feel a little claustrophobic. Was it simply because I was so used to triple-spacing?

What do most scripts use?

I decided to spend a couple hours going through 171 spec scripts, and pre-shooting drafts, in my collection to get a sense of what was considered “standard.” It’s by no means exhaustive, but I’d say the sample is large enough to provide a fairly accurate assessment.

Here are the results:

Somewhat surprising results! Nearly half of the scripts I went through were double-spaced.

Perhaps even more surprising is that nearly 10% of the scripts used CUT TO: (or other transitions) to separate each scene.

All of these scripts were what I would consider “professional.” That is, they were either written by pros, or were on the Black List, etc. No production or shooting scripts were reviewed.

In the end, I decided to leave the triple-spacing in my script and hold fast at 111 pages. But it was nice to see that double-spacing was a very viable option (especially if you’ve been diligent about limiting the number of action lines per paragraph to provide ample whitespace).

Is this kinda stuff interesting to you guys?