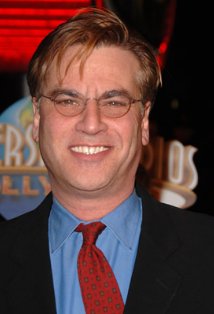 I watched The Social Network again last night, but this time with the audio commentary by Aaron Sorkin and various cast members.

Given Aaron Sorkin’s successes and accolades, it’s easy to forget that he’s just a dude with the same writing challenges we face. Sure, he now has unparalleled access to people who can get his scripts made (and he’s probably a supergenius), but he starts with a blank page, just like the rest of us do.

A couple of things popped out at me while listening to the commentary.

1. He says that the hardest part of the process for him is just starting to write.

What? Really? How can that be the case for such a prolific, experienced writer? Yet, it’s true. I was too engaged in the commentary to copy down what he said verbatim, but basically after he spends months researching a project, it’s very hard for him to start the script.

He struggles to figure out his way in to the story. For him, that’s the hardest part.

2. He labors over his words

The dialogue in The Social Network is so smart, snappy and authentic that I sometimes picture Aaron Sorkin writing stream of consciousness, as fast as his little hands can type.

So it was encouraging to hear him talk about scenes that gave him a peculiar amount of trouble.

For example, there’s this scene that takes place after Mark Zuckerberg (Jesse Eisenberg) has just launched the first version of (the)Facebook:

MARK is staring at the computer...

MARK doesn’t hear him. We just see MARK’s head from the back and it’s ever so slightly bobbing back and forth...

Well apparently Aaron Sorkin “labored” over the word, “praying.” He wasn’t sure (and still isn’t sure) if he should have used “davening” instead.

I’m not sure what I found more interesting — the fact that he labored over that decision, or that I had no idea what the hell “davening” meant.1

It’s a common issue. You have a word that might be “perfect,” but it’s likely to lose a portion of your audience that isn’t familiar with it.

Sometimes it’s just comforting to know that even Aaron Sorkin grapples with these ridiculous writing problems.