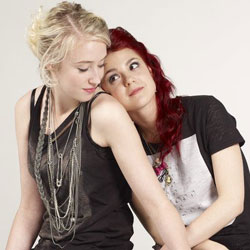 There’s a really engaging TV series in the UK, on Channel 4 (E4), called Skins (not to be confused with the short-lived MTV version). Part raunchy drama, part teen comedy, the BAFTA-winning show is packed with gripping characters and storylines.

It’s made all the more impressive by the fact that the entire main cast is replaced every two years! (And you thought Glee was harsh!) On top of that, each episode focuses on a different character that you can’t help but love by the end of the hour.

On seasons/series 3 and 4 there were two stand-out characters — Emily and Naomi (known as Naomily by their legions of fans); fearlessly played by Lily Loveless and Kathryn Prescott.

Their two-season journey was exciting, poignant, surprising, touching, agonizing and uplifting. Everything you’d want in a story arc. So much so, that I decided to use my screenwriting sensibilities to create [say this next part in your head with an ominous echo] the ultimate Naomily Youtube video!

It’s called “Naked.” (Settle down, no one’s actually naked. It’s a play on the many definitions of the word, like exposed, raw, vulnerable… Plus the main song used is “Naked” by Tracy Bonham.)

Why spend the time to make such a video?

How do you distill two seasons into a video that’s under ten minutes in length, present it in a way that’s fresh, and hone the story so that it can stand on its own?

It involved doing what all good screenwriters do — strip everything out until you’re left with only the story you want to tell. Similar to writing a script, there were so many wonderful scenes that I wanted to include but didn’t support the main narrative, so they had to go. It was a really good exercise in killing your darlings.

3. To create something visual.

We toil away for years in our darkened rooms, writing stories that we hope will sell or, dare we dream, actually dance across the silver screen one day. Sometimes it just feels nice to be able to create something that people can see right now and say, “Wow.” (Of course an original short film would be better, but…)

The resulting video utilizes non-linear storytelling, and synchronizes key actions and scene cuts to the music, to enhance the emotional punch. In doing so, hopefully it becomes more than the sum of its parts. Let me know what you think!

This video doesn’t contain any nudity or significant swearing, and would probably be acceptable by late-night network television standards (tame by cable television standards). However, it does contain several scenes of girls kissing, etc. So if you’re homophobic, or lesbi-antsy, you might want to stay away from this vid… But if you do, you’ll be missing out on something rather beautiful.

FYI – The first three seasons of Skins can be streamed through Netflix or Amazon. The fourth season DVDs can be rented or purchased through the same.