Visionaries or Rip-off Artists? (Or Both?)

When we think of people like James Cameron, Darren Aronofsky, the Wachowski brothers, Tarantino… many words come to mind: visionaries, geniuses, mavericks, thieves — wait, what?

The experts at CRACKED.com have come up with another excellent film-related article that showcases “7 Classic Movies You Didn’t Know Were Rip-Offs.”

I’m all for paying homage to classic movies, or using concepts from old shows or books as jumping off points to begin an original story, but did these movies take it too far?

CRACKED.com’s insightful and thought-provoking article provides a historical perspective, videos, and side-by-side screen captures, where applicable, of seven such instances.

… a pop singer instead of a ballet dancer, but other than that, Black Swan could pass for its American remake. In both movies, the young, innocent protagonist has just moved on to a more demanding job (dramatic actress/lead dancer), and the pressure turns her apeshit. She gets chased by a “double” who may or may not be the product of her imagination, and at one point becomes convinced that she killed someone. 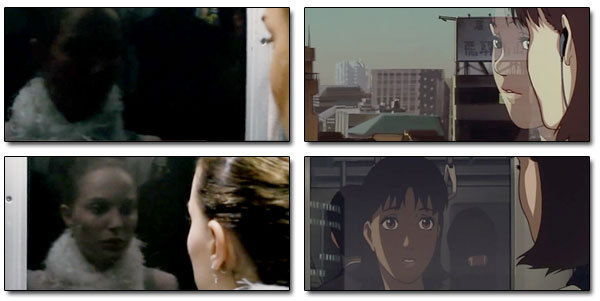 Yes, the pictures also come to life and taunt her in Perfect Blue.

Here’s the full list of movies that they scrutinize:

#7. Pirates of the Caribbean Is Suspiciously Similar to the Game The Secret of Monkey Island

#6. The Matrix Was a Comic Book

#5. Black Swan Was a Japanese Cartoon

#3. Wild Wild West Was an Episode of Batman: The Animated Series

#2. Terminator Was a Bunch of Harlan Ellison Sci-Fi Stories

#1. Reservoir Dogs Was a Film From Hong Kong

It’s worth pointing out that a few key scenes and ideas does not a movie make. All of these movies (with perhaps the exception of Wild Wild West) feature brilliant story elements, dialogue and cinematic innovation that did not appear in the sources that are being cited. The execution of an idea is a thing unto itself. That’s why you can’t copyright a concept.

But — if the execution is virtually identical, that’s another matter… Seriously, check out the Reservoir Dogs section and tell me that wasn’t something more than an homage.

What’s your take? Does the knowledge that these filmmaking icons borrowed (stole) key elements from these previous sources cause you to look at them in a different light?

Read the full article at CRACKED.com.