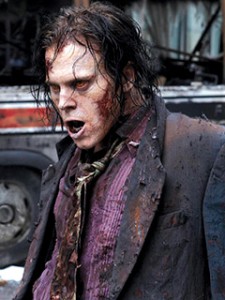 My vote for the coolest zombie ever featured on The Walking Dead.

There’s been some great discussion happening in the comments section of the post about my Walking Dead gripes. I can always count on my Scriptwrecked readers to provide intelligent insights, answers and counterpoint to my posts.

It’s nice to know that there are many others out there whose brains don’t check out just because they’re watching a show about zombies.

One comment in particular was so comprehensive and thought-provoking that I’ve decided to promote it to regular blog post.

Here is “Vector’s” (RRL’s) commentary on some of the logic/science issues that plague The Walking Dead, as he answers the questions I posed.

I have similar questions about the logic of the Walking Dead also. I suspect some of the contradictions are set up deliberately by the writers to cause exactly what we are doing: debating about the show. Now matter what the debate, it’s good “buzz”. Anything to keep peoples interest in a show when it’s over is good.

Okay, that opinion is debatable so I won’t go any further with it. It could be just crappy writing. (Or simply deliberately throwing out logic for cinematic effect or budget)

Here’s my 2 cents on your 3 questions.

I’ll answer them in reverse order as that way one will lead to another.

I believe that isn’t the real question you meant to ask. We all know you become a walker from physical transition of the virus (it’s not airborne) it must be transmitted through saliva or blood. There are many real viruses that are spread the same way, each with different levels of how easy they can be spread. The basic rules are a small amount of either blood or saliva in your blood stream is instant infection (from a bite or contusion). Contamination through the mucous membranes (blood or saliva in the eyes or mouth) and possible contamination through blood or saliva on the skin is possible. The problem is that is has never been made perfectly clear yet in the “Walking Dead” world every possible way the zombie virus can be specifically transmitted.

Some viruses can be transmitted through a simple touch of dry skin on dry skin, (of course others are so sensitive that they can be transmitted through close proximity, (airborne viruses), or even by being carried on an inanimate inorganic object (getting a cold from touching an infected doorknob) Most viruses are actually transmitted these latter, easier ways but that would not make for good cinema, unless the point was to wipe out everyone except the immune as fast as possible and focus on the survivors living in the post apoc world (as opposed to focusing on “trying not to get the virus”). BBC’s “Survivors” is one that comes to mind that uses the more realistic way of airborne transmission to good effect. (everybody dies quickly except the immune and the extremely isolated in artificial environments.)

Becoming a Zombie always is transmitted through physical means. It would be stupid if it was airborne. That would take out the “bite” factor that is key to the Zombie genre’s success.

What I really think you were asking is “what’s with all the dead uneaten bodies?” That situation doesn’t make much sense to me either, especially if they were uninfected. I won’t even try to come up with an explanation for that right now, hopefully it will be explained in future episodes. If not I’ll come up with something to justify the crappy writing.

The conclusion I’ve come to is that zombie infection only happens with blood to blood transmission. Saliva and through the mucous membranes might not be enough. That’s the only way I can wrap my head around it. It seems ridiculous that they seem careless when smashing zombie heads when they are afraid of the blood even getting on their skin, but it seems they are realizing that skin contact doesn’t matter. I just wish they would make it more clear.

2. Are the Walkers Dead or Alive?

What is your definition of alive? Spiritual? Biological? One of the definitions of “Alive” is simply “animated”. It’s a relative question that brings in spiritual debate whether the Zombification is supernatural or scientific.

In The Walking Dead it’s made clear that the brain dies. All the synapses that make cognitive thinking and bodily functions shut down, resulting in clinical brain death. The body is dead.
Then the virus takes over the motor part of the brain and uses the body as a host. The body reanimates but is now a vehicle driven by the virus. It is alive, but not the same lifeform it once was. What makes something alive only means that a spiritual or mental or artificial force is moving a “body”. If my brain could be implanted in a car and I still had all my current thoughts, but the car was now my body, wouldn’t that make it “alive”. Is that any different than when I drive a car now? I essentially make the car “come to life”. Does “life” have to rely on biology?
It’s all relative to your spiritual believes really. Take Wall-E for instance. he’s just a robot, no biomechanics, but he’s alive.

One theory is that the zombie virus can only live in the body while it is still “alive” so it’s main purpose is to make the body find food. If the virus just sat in a dead unmoving body, after time the body would dry up and decompose and the virus would die having nothing left to live off of being primarily a parasite.

Another motivation of why the zombies want to eat you could be just for the sole purpose of spreading. Maybe eating for sustenance has nothing to do with the virus and it is just a primal instinct left over in the human brain, the main purpose being the “bite” to spread the virus. The left over primal instinct (remember dude’s wife continually returning to her house?) brings up another point. There is still something left of the “real person”. Is it just residual memories? Is the person’s soul still in the body? Are they trapped knowing what is happening, not able to control? can they control a little? Just that opens up volumes for debate.

That brings up the point of why they eat? Is it just to spread the virus or do they really need the sustenance? Does their digestive system work? but they don’t breath and their heart doesn’t pump, or does it? I think it all does. Depending on how intact the body is would determine how long the zombie would live. All it needs is the brain and nervous system to move. but without a digestive system and a working heart the body would shrivel up and dry up and decompose within weeks. This brings up a whole new world of zombie debate. How much of the bodies systems that sustain life are working, what systems does the virus depend on for longevity?

Look up time lapses of decaying body experiments, it happens faster than you would think. Ever seen a deer on the side of the road dead that the DNR or DoT neglects? It doesn’t last very long (even without scavengers). In reality (a very twisted reality where there actually were existing zombies) I believe the problem would readily fix itself. The zombies would decompose very quickly (within weeks). There would be no flesh for the nervous system to control (it would all fall off the skeleton or be too mushy to pull on the bones). Animated skeletons are not zombies. Although there is plausible scientific explanation for the zombie theory (look up zombie insects and parasites(real world), it’s quite interesting) I’m sure moving skeletons can only be explained by the supernatural.

3. What are the walkers attracted to?

In the walking dead definitely smell. Pluchar’s theory of sight and sound first and smell to confirm makes sense but the plain truth is that the writers of Walking Dead are not sticking to their rules. There are times when only smell attracts the zombies. Sounds always definitely does. But there are times when smell doesn’t. Maybe it depends on the “mood” of the zombie at a given time. That’s the only explanation i can come up with for the zombies blood thirst at one moment and their indifference to scent at another. (perhaps it depends on the level of decay of their sensory organs)

Smelling isn’t only dependent on the nose either. You have to think of how smelling works. Small particles of something float in the air and land on special nerves in your nose. Those nerves send a signal to your brain”hey guess what I found in the air”. Those nerves could be anywhere. You could smell with your bellybutton if you were wired right. Some animals/insects “smell” with antenna, some with their tongue some with their skin. It all depends where the “smelling” nerves are branched out to from the brain. It could be possible that the zombie virus (being a virus that directly manipulates the nervous system, hence the walking) could manipulate the way your body smells (detects particles of something in the air). A zombie may still smell with his nose, but if it rots off he may be smelling with his eyes or ears.

just opinions, what are your thoughts?