5 Reasons Why THE WIRE Was So Damn Good 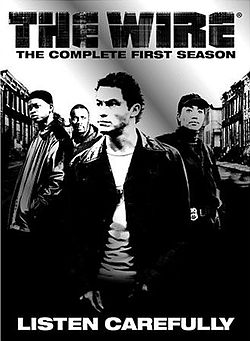 The Wire, which aired on HBO between 2002 and 2008, is widely acknowledged as one of the greatest television dramas of all time.

Everyone knows it. No one disputes it. Yet, for whatever reason, I’d never taken the time to watch a single episode… Until recently, when I got sucked into its web of awesomeness.

I quickly blazed through season one, and am now working my way through season two. Having the benefit of seeing so many episodes back to back, I thought I’d take a crack at determining what sets the show apart.

5 Reasons Why The Wire Was So Damn Good

The dialogue does not shy away from the vernacular of drug dealers or the cops. It’s so authentic that, early on, there were many scenes where I couldn’t even understand what the characters were talking about! The more episodes I watched, though, the less that happened.

It reminded me of an interview with Network director Sidney Lumet, where he spoke about how he was initially wary of all the obscure broadcast terms and lingo in that script. The great Paddy Chayefsky assured him that people may not understand what was being said, but it would make the scenes more believable. Boy was he right. And The Wire is no different in that regard.

Beyond that, every scene feels real. I watched an episode of Person of Interest last night. It’s a great show, but there was a scene in last night’s episode where a relaxed confidential informant (CI) happily accepts money from a detective in the middle of a crowded sidewalk in the area that he frequents. After watching The Wire, that just didn’t ring true.

The Wire gives the “bad guys” as much screen time as the “good guys.” You get to know the drug dealers as people, who are often products of their environment, not simple thugs… how they got into the lifestyle; what keeps them there; what scares them; what they wish they could change; how different they are from one another.

In the show, as in  reality, there are good and bad people on both sides.

There are some nice cinematic touches in The Wire. By that I mean things that are typically reserved for movies… In season one, lines said in the first episode are mirrored in the final episode to great effect. There’s one central, far-reaching case that spans an entire season…

But most significantly the characters change. Typically on a police procedural you get your stock characters that may have revelatory moments, but ultimately never truly change. In The Wire, there are multiple characters that go through major movie-worthy arcs, and surprises.  That lazy cop? Maybe he turns out to be an ace detective. That guilty felon who avoids prison because of an unreliable witness? Maybe he’s truly a man of conscious.

Any time you can delve into a world, or aspect of a world, that audiences have never seen before, you’re on to something. We’ve seen cops, drug dealers, lawyers and politicians on shows before, but somehow The Wire pulls back the veil on aspects of police procedures and “the game” that have never been explored, or at least not so thoroughly.

Some of the most interesting battles in the show don’t take place on the street, they take place in offices at the upper echelon of law enforcement.

And every other actor in the show is terrific as well. There are some scenes where it doesn’t even matter what’s happening — you just enjoy watching because the actors (and their characters) are so captivating.

Unfortunately, it’s not something that you can expect when writing a script — only hope for.

If you haven’t seen The Wire yet, you can watch every episode on on HBO GO or Netflix. Check it out. It’s time well spent.

Oh, and if you leave me a comment, no spoilers please! Thanks!