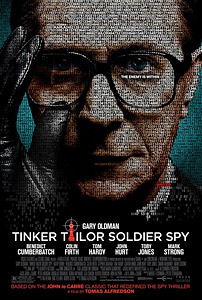 Anyone else a feel little disappointed by this movie?

I’ve decided that you can’t call your movie a Thriller if A) no one runs in it, and B) the protagonist is never shown to be in any real danger.

An intense Espionage Drama? Sure. But a Thriller? That’s a bit of a stretch in my opinion. Damn you false advertising!

And what was the big fuss over Gary Oldman’s performance? Solid acting to be sure — but some of the reviews were making it sound like it was the role of his life.

Or maybe it was — what do you think? Was his performance understated, nuanced and bravura? Or was it just stoic, boring and unchallenging?

Did the trailer or the commercials have you feeling a little deceived when you finally saw the movie? Or was it just me? Let me know!