The 4 Things You Need To Sell Your Script 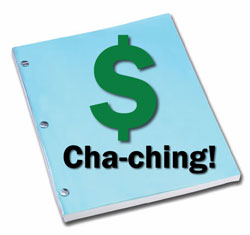 As discussed in my quick review of The Great American PitchFest 2012, I attended four free screenwriting classes.

The first one was a panel discussion with Ken Rotcop, Melody Jackson, Kathie Fong Yoneda and PJ Smith. I thought one of the highlights of the discussion was when Ken Rotcop mentioned there were four things you need to sell your script:

Let’s take a look at each of those things.

It all starts with a damn good script. At the amateur level, you can pitch the hell out of a story, but if you don’t have a great script to back it up, you’re dead in the water. Having a great script is the most important thing to concern yourself with. But it’s not the only thing…

So you’ve got a damn good script. Now what? Who do you send it to? Who will read it? Part of the business of screenwriting is developing contacts who will be able to push your script into the right hands. If you have no contacts, winning (or making the finals of) an established screenwriting contest may get you some, as will attending events like The Great American PitchFest (GAPF).

They say timing is everything. Well, it may not be everything, but it’s certainly an important part of selling your script. For example, a few years ago Bob Schultz (one of the organizers of GAPF) had an idea for a vampire movie based in Alaska, where there are months of darkness. The title of his script: Frostbite.

Numerous producers were excited about the idea… and then 30 Days of Night was announced. Poof — the interest in his script disappeared like hot breath in the cold Alaskan air. If he had completed his script a year earlier, who knows what would have happened?

I remember hearing a story about a screenwriter who had nearly given up his dream and was working as a pool cleaner. At one house he noticed that the homeowner was reading a script. Soon the two struck up a conversation. It turns out the homeowner was a Hollywood producer. When the pool cleaner told the guy he was a screenwriter, the producer asked him what scripts he had. Fast forward a few months, and that screenwriter ends up selling his script! Talk about luck! (I’ve forgotten which famous movie or screenwriter this story belongs to, so if anyone out there knows, please post in the comments.)

This story may be an extreme example, but every script sale needs a little bit of luck. How do you cultivate luck? To paraphrase Thomas Jefferson — the harder you work, the luckier you’ll be.

Is this the year you sell your first script?