The Hobbit and High Frame Rate 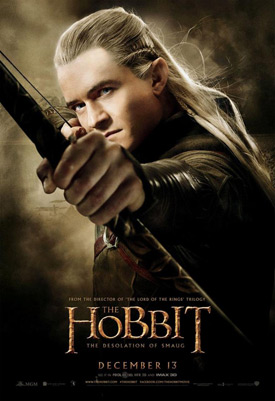 In select IMAX theaters they’re showing the The Hobbit: Desolation of Smaug with the higher frame rate (48 frames per second vs. the standard 24 frames per second). Having never seen a movie with this controversial format before, I was excited to experience the high frame rate (HFR), which promised more vivid and realistic images.

Within the first few moments of the film (and Peter Jackson cameo), I immediately understood why there was so much controversy over this format. The images were crisp and life-like… and didn’t look like a movie.

My brother said it was like watching a televised BBC production (TV has a higher frame rate than movies). Some people liken the experience to watching a play. I’d go one step further. It was like watching really clear behind the scenes footage of a movie, where you see the actor in costume rehearsing their lines — and at no time confuse them for their characters.

If you’ve ever been on a movie set, you’ll quickly notice how fake everything looks in real life. Why the hell would I want that? I want LARGER than life for my movie experience, thank you very much!

I’m always an early adopter of technology. I love innovation and applaud Peter Jackson for trying this new format out. You never know when something new will resonate with audiences. Believe it or not, “talkies” (i.e. modern movies where you can hear the actors’ voices as they say their lines, instead of reading their dialogue in subtitles) were controversial when they first came out.

But I can’t help but feel like HFR is a solution to a problem that didn’t exist. Movies aren’t reality. They’re heightened reality. The paradox is that making films look more “real” may actually compromise our ability to suspend our disbelief.

If the goal is to make the movie-going experience more like real life, perhaps we should get rid of the score in scenes where there wouldn’t normally be music playing. Or maybe we should shoot all of the scenes from one camera angle. All this jumping from angle to angle stuff isn’t how we view the world.

And when is that smell-o-vision gonna get here? I’m sure audiences would love that. I can think of one scene in particular from Slumdog Millionaire that would be especially… powerful.

Did you see The Hobbit: Desolation of Smaug in its higher frame rate? (If you’re unsure, then you probably saw it at one of the majority of theaters where it was played in its converted and standard 24 fps.) What did you think of the format?